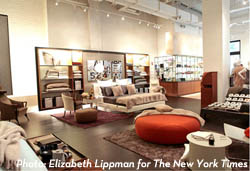 This week's Thursday Styles, Critical Shopper, Alexandra Jacobs investigates SoHo's Sleep Studio, a concept store devoted to everything bedroom related. She opens with a recounting of her own peculiar "early-rising" sleep disorder that seems vaguely Kuczynski-esque with only a tiny soupçon of over-sharing and, sadly, none of the bewildering crazy that our original Critical Shopper used to serve up regularly.

But on to the store, which takes a clever concept with potentially wide appeal but pitches it more toward SoHo's well-heeled residents than its sneaker-shod tourist population. Additionally, it errs on the restorative, restful side of bedroom activity as opposed to the racier side of things. Even the "relaxation aids" have been sanitized to avoid any confusion,

“They’re supposed to be classy,” said a clerk with a chestful of tattoos that also seemed more neighborly than transgressive, as she cheerfully wiggled the two prongs of what looked like a large pink molar back and forth. “What do you even do with this? I don’t know.”