Is Banksy's Next Pop-Up Shop On HauteLook? One particular store on Bleecker Street is about to get a lot louder.
Robert Graham, the men's designer label started twelve years ago with some very colorful shirts is coming to Bleecker Street sometime during this Holiday season. Coincidentally, the brand will be taking over the whitewashed storefront at 380 Bleecker that, for many years housed various shops run by founder Robert Stock's former business associate Ralph Lauren. After years designing under his own name, Stock created Robert Graham as an antidote for boring, bland menswear, and his colorful shirts, which often combine two or three or more different patterns in a single garment (see example below), have proved to be very successful in upscale department stores without particularly impressing the more rarefied Men's fashion press or editors. It's not an unusual or necessarily unfavorably place for a brand to be. It's where you will find Coogi sweaters and anything from Jhane Barnes. Some of the limited edition Robert Graham shirt styles go for nealy $600, and they are all very patterned and colorful —usually at the same time.

This appears to be the brand's 11th store. Now that it has grown to include a full sportswear collection as well as womenswear, it remains to be seen how much of it a typically diminutive Bleecker Street shop can feasibly hold and still have room for customers. We will have to wait until sometime between Thanksgiving and Christmas to see exactly how Robert Graham will fit in on the trendy street. 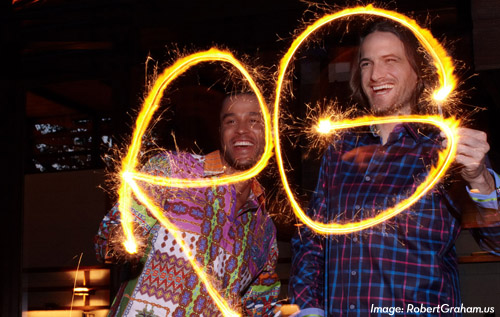