Opening Ceremony Launched COS Last Friday, But The Real News
Was A Brand New Men's Floor 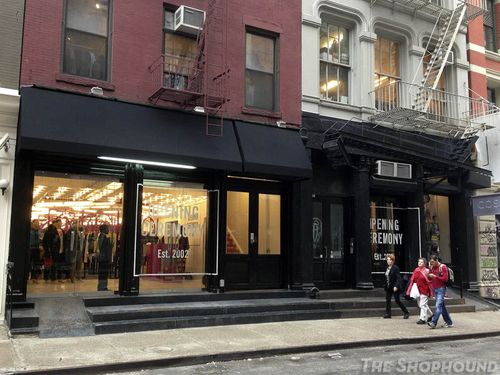 In all the excitement over Opening Ceremony's exclusive U.S. preview of H&M's upscale brand COS, nobody seemed to notice that the ever-evolving retailer had added an entire new men's floor to the mazelike complex that serves as its flagship store on Howard Street. In an unusual, and particularly OC-ish move, the new floor is actually the street level of the building that houses the men's departments, most recently used for the store's sample and clearance sale, now remodeled and permanently open with its own entrance and a new passage through to the original store. Inside, the space is 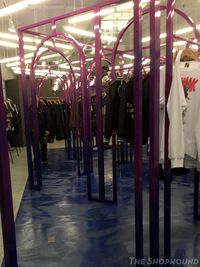 set up with long racks on each side and a series of arched, cagelike fixtures (at left) in the center which are currently showcasing some of the store's brightest and loudest designers for men like Bernhard Wilhelm, Walter Van Beirendonck alongside mainstays like Raf Simons and Dries Van Noten, and the store's ever expanding private label collection. Of course, this being Opening Ceremony, it's still a workout to get around the whole store. The second and third levels are still only accessible by a bunch of stairs, but the configuration leaves the store in a configuration somewhat reminiscent of the old Barneys on 17th Street with separate, self contained men's and women's stores side by side.

An as for COS, seen in person, it lived up nicely to its advance hype. Presented in a single, four sided gazebo-like structure (pictured below), the capsule selections for men and women had a sleek, minimalist yet accessible vibe that reminded us how much we missed Uniqlo's +J collections from Jil Sander. The prices seemed quite reasonable for the quality we saw, falling in roughly the same range as J.Crew, and while we were there on Friday afternoon, shoppers were snapping it up. There still seems to be a reasonable selection online, but we don't expect it to last terribly long, so act fast if you are intrigued, or wait until next Spring, when the line arrives in its own store in SoHo. Posted at 12:17 AM in COS, Opening Ceremony, Renovations, SoHo/NoLita | Permalink | Comments (0)