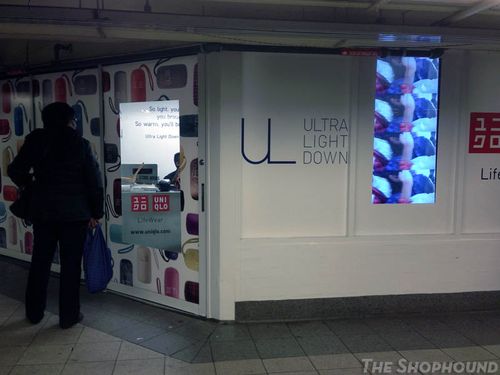 In case you haven't been paying attention, The New York area is experiencing an influx of a bunch of new Uniqlo stores at the moment including Staten Island and Bridegwater Commons already open, Atlantic Terminal coming this weekend, and Menlo Park, Smith Haven Mall and Westfield Trumbull Mall in the next couple of weeks. Such an event never goes unmarked without some kind of special promotion from the Japan-based chain, and this time they have opened a pop-up store for their popular Ultra Light Down collection in Union Square, or rather under Union Square.
In the subway station.

'What a clever idea,' one might think. After all, when was the last time you found a pop-up store in a subway station? As a hub for three busy, far reaching subway lines, Union Square would seem like an ideal spot. Actually, the shop opened last week, and we had been meaning to check it out when we realized that we had been through that station several times without even noticing it. That's when we realized the drawback of a pop-up store in the subway station: The only reason anyone goes into the subway is to eventually get out of the subway. Either you are waiting for a train to come, or you have just gotten off one and are trying to get to the surface as quickly as is humanly possible. In fact, veteran riders know exactly where to stand on the platform so they can be as close to an exit as possible when they reach their destinations. Nobody lingers in the subway. Everybody passes through, but nobody actually wants to be there, let alone start shopping. We are kind of curious to know what kind of business this shop, which will be open through the Holidays, is doing. It's pretty tiny, and probably exists more for visibility than profits. If you want to check it out, it can be found near the exit at 14th Street and Fourth Avenue, just inside the turnstiles, but if you really want to shop, one of Manhattan's three huge Uniqlo flagships would probably be a better bet.