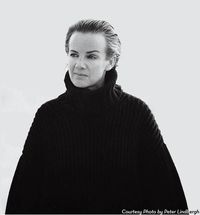 It's a surprise, but really not, because it has already happened twice before.
In a Groudhog Day-esque scenario, designer Jil Sander has once again left the company that bears her name,
For the third time.
"Personal reasons" have been cited as the reason for her departure.

We have heard this story before, of course. The Spring 2014 collection she showed last month, only her third after returning again in February 2012, will be her last under her namesake label. The next line will be designed by her current design team. Though it was a surprise that she returned to the brand at all, she was instrumental in stabilizing it after the acclaimed, previous creative director, Raf Simons left to join Christian Dior. Ms. Sander memorably left the label for the first time six months after selling 75% of the brand to Prada in 1999 among rumors of strong disagreements between the designer and her new bosses. She returned after a few poorly received seasons under creative director Milan Vukmirovic, and then, after successfully redirecting the company, departed once again in 2004 for eight years during which she memorably created a hugely popular, affordably priced collaboration collection with Uniqlo called +J. That line was abruptly discontinued shortly before it was announced she would return to the Jil Sander label early last year. While the label has released an appreciative statement regarding the designer's contributions, there is no immediate word on a successor. Ms. Sander will turn 70 next month, and it is possible that she may just be ready to retire. A notoriously private person who started the brand 46 years ago, it's not out of character that she would want to avoid the kind of splashy farewell that other iconic designers have favored in recent years.