Have A Look At Barneys' Holiday Window Instagram Videos 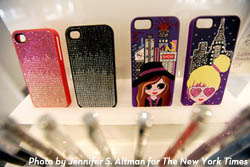 This week's Critical Shopper Alexandra Jacobs makes her way to Brooklyn to check out the borough's latest validation as a bona fide shopping destination: A Swarovski store. Congratulations, Brooklyn. You're almost like a real mall now. Jacobs approaches the assignment with a certain amount of skepticism, because, you know, store full of sparkles.

Swarovski stores are not, after all, an unknown quantity. This would be the area's 10th, so we're all pretty familiar. Mostly, Jacobs tells us about Swarovski the company in all its many divisions, than about the actual stores, which simply sounds like a place filled with glittery jewelry and pricey, crystal festooned curios of questionable taste. They may seem acceptable taken one by one, but all together, they create an overwhelming effect even for those who normally like shiny things just fine,

USB keys glinted with ersatz amethyst in a nearby vitrine. Even the stems on a pair of martini glasses were fully loaded. It felt like the visual equivalent of having pop music play in your head all day (and that was happening, too).