FOR A GOOD CAUSE:

Earnest Sewn To Shutter Shops In Advance Of 2014 Relaunch 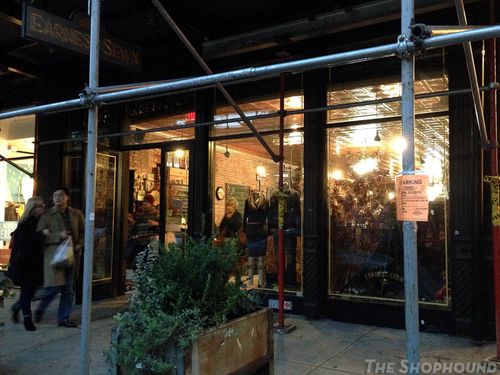 Fans of premium denim brand Earnest Sewn will have only a few more weeks to stock up on their favorite  denim styles before the company's shops on the Lower East Side and in the Meatpacking District (pictured above) close down due to new ownership. The once coveted label's trademarks have been purchased by Anthony Frym, an industry veteran, who will relaunch the brand sometime next year with a new store in an as-yet-unannounced location. Not much is known about Frym's plans for the brand beyond his work to set up new manufacturing in California for the new Earnest Sewn, so he will  maintaining its "Made in U.S.A.' heritage. We have to note that Frym purchased only Earnest Sewn's trademarks, not its operations or retail stores, which is why they are closing. Since co-founder and creative force Scott Morrison departed the brand a few years ago, Earnest Sewn's wholesale business has diminished to almost nothing as retailers turned to other labels, including one that Morrison started himself. Whether or not Frym will keep some of the line's most popular (and still highly relevant) jeans models like Harlan or Kyrre is unknown, as he will basically be re-building the brand from the ground up with a new creative team. The label's website (pictured below) now features only a "Coming soon" message along with an encouraging switch to a clean, sans-serif lowercase logo more like the one it originally used before it switched to an overall "Ye Olde Denim Store" aesthetic. “For me, it still has a very strong American brand image,” he tells WWD. A countdown clock on the homepage points to February 16th as the day to mark for more news of Earnest Sewn's future.

In a sense, this is the story of what happens to a premium denim brand when Scott Morrison leaves. For example, the once red-hot brand Paper Denim & Cloth faltered when Morrison, who was instrumental in developing it, left to start Earnest Sewn. Morrison's intriguing new brand with its unique, Japanese inspired wabi-sabi detailing, easily stepped into the stores that dropped the declining Paper Denim, very much like his current, even more expensive, artisan-inspired brand 3x1 has pushed Earnest Sewn out of influential denim stores like Barneys and Ron Herman. Recently, new owners are also in the process of re-launching paper Denim & Cloth as a premium label after it tried to trade down as a more moderately priced line, but they are now facing an even more crowded market full of connoisseur labels like 3Sixteen, novelty driven brands like Naked & Famous and ever more popular overseas imports like Sweden's Nudie. In about three months, presumably, we'll get a better idea of how Earnest Sewn's new life will unfold.