H&M Will Go Gaga In Times Square At 12:01 AM On Thursday Morning An ambitious menswear label just took home the ever-more prestigious CFDA/Vogue Fashion Fund award yesterday. Public School (a look pictured below left) designed by Dao-Yi Chow and Maxwell Osborne (pictured above with Runners-up Juan Carlos Obando and Marc Alary) has been delighting editors and impressing retailers like Barneys, Odin and Bloomingdale's for the past couple of seasons with their unique mix of classic and street style and high level of workmanship, so their victory is not a total surprise. 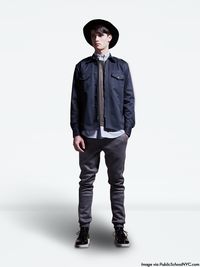 What will be special for them, is that this year, the contest which has granted $3.8 million to over 30 up-and-coming designer labels since 2004, is being made into a television docu-series to be seen on the Ovation network starting on January 22 (which is happily in time for Ovation' return to Time-Warner Cable's channel lineup early next year). Chao and Osborne will be receiving a $300,000 grant as well as intensive mentoring from the CFDA to continue growing and strengthening their business. Runners-up Obando, who designs a women's collection and Jewelry designer Alary will also receive mentoring and a $100,000 for each. In fact, all of the finalists, including Todd Snyder; Nonoo’s Misha Nonoo; Tim Coppens; Veronica Miele Beard and Veronica Swanson Beard of Veronica Beard; Parabellum’s Commodore Jason Jones; Tome’s Ryan Lobo and Ramon Martin; and Shimon and Ariel Ovadia of Ovadia & Sons have been benefiting from CFDA mentoring over the course of this year since their nominations were announced. That process will probably be included in the series as well. Producer Robert Weiss has promised that the show called “The Fashion Fund,” will focus on the designers' and CFDA/Vogue panel members' journeys, and avoid Project Runway style drama, “There’s no running down the hallway with scissors here,” he tells the New York Times' Cathy Horyn.

For the past few seasons, the winners and runners-up have also created capsule collections for J.Crew stores, so we will be looking forward to next Spring when those collections are expected to drop.

See a trailer for "The Fashion Fund" after the jump.