Sale Shopping At Saks Is Relaxed...
Until You Get To The Shoes It has been years since The Shophound went shopping on the day after Christmas —mainly because it can easily top Black Friday insane, aggressive bargain grabbing even in the most exclusive of stores. This year, however, we thought we would give it a shot, just to see if there was enough merchandise left after some pretty heavy pre-Christmas price promoting. In the past few seasons, stores have been extremely tight regarding inventory, so that by the time the Holidays rolled around, there was often only meager selections left for clearance business. This year, there was a bit more confidence in the market, and Holiday business in general has been closer to more optimistic expectations. Rather than making a tour of every store in Manhattan (seriously, how much energy do you think The Shophound has?) we picked Saks Fifth Avenue as our microcosm to see just how the immediate day-after-Christmas sales would pan out this year.

As in the past, Saks opened at 8 AM this year on December 26th offering extra discounts on marked down goods of up to 50% only until noon, when the discounts mostly reverted to 30% off. This brings savings up to 60% to 70% off, which is generally as good as or sometimes better than waiting for the final clearance sales that will come next month. While we have seen the main floor packed on such days in previous years, we were surprised to see things relatively subdued on the main floor when we entered sometime around 9 AM —possibly because the handbag and accessories departments at Saks are so sprawling and fragmented. Expect this arrangement to change once the chain's new owners start shaking things up, but for now, activity felt key, and as we rose on the escalators, we saw sale racks with a good number of customers, but not the rabid frenzy we were expecting. Then we hit the first men's floor on 6, where the shoe sale racks were swarmed (pictured below). It was a challenge just to get near the section for our size, and one floor up, where the casual and designer men's shoes were racked up, it was equally as crowded. It was one floor up on Saks' vast women's shoe floor where things were really getting crazy —or so we could see from the escalator (pictured above). It seems that the women's shoe department was so crowded and busy that security had to close it to new customers, letting them in one by one as other shoppers left. It turns out that as much as nearly every department store in the city has enlarged its shoe departments, they can never get big enough. New York shoppers' desire for shoes —whether full-price or on sale— seems to know no limits. The other part of the store that seemed to come close in activity was on the Ninth floor where most of the rest of the men's sale merchandise was consolidated in a vast arrangement of racks. Perhaps this set-up is better for daily numbers, but it made for a very tight shopping environment. One might question whether or not a luxury store like Saks should really turn itself into a discount-store environment just because it is sale time, but that is a question for management and new owners to ponder. Now that the immediate, before-noon discounts have expired, things should quiet down a bit, but there's still a big vacation weekend coming up with lots of people and tourists on vacation as well as the possibility of extra New Years Day discounts, so if there's still money burning a hole in your pocket, there will still be some opportunity for savings in the next week or so. 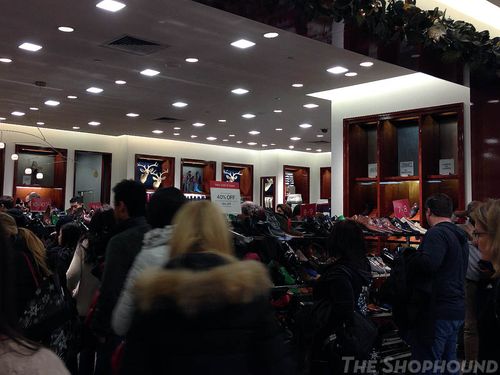