The Pop-Up Flea Returns This Weekend In Person & Online

Menswear's fan-favorite shopping event finally returns this weekend as The Pop-Up Flea opens up in SoHo tomorrow afternoon at 3 coming off a triumphant debut in London. After five years, the brainchild of brand gurus Michael Williams and Randy Goldberg still feels a little bit like a best kept secret, but everyone's favorite super-deluxe Holiday shop is getting bigger than ever. In addition to a foray overseas, this year's edition is partnering with East Dane, the new men's online retailer from Amazon and Shopbop, to open the event to the interested shoppers who have simply never been able attend in person. The site will offer a selection of goods from Pop-Up Flea regulars like Billykirk, Levi's Vintage Clothing, Isaora, Ernest Alexander and Alexander Olch just for the weekend but with all the ease of Amazon.

For those of us who have been known to stand in line to get to the event in person, this year's venue at the cavernous 82 Mercer Street will offer a lot more space for a whopping 53 vendors, so plan to spend some time and bring a usable credit card. Watch Williams and Goldberg preview the event in the video, and, after the jump, have a look at the list of participants including the regular suspects and some notable newbies. 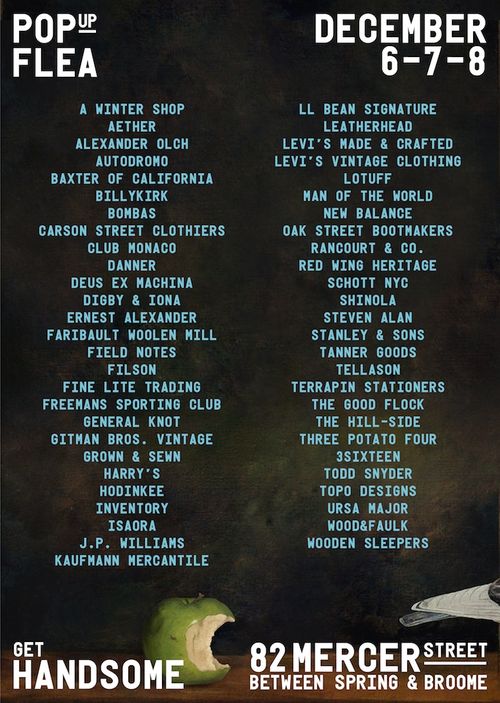