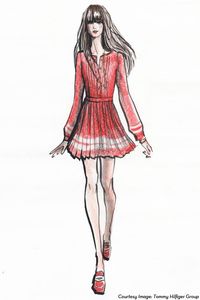 Expect to see a lot of blue doe eyes under a heavy raven-haired fringe on bus shelters and subway ads this Spring as Tommy Hilfiger launches a collaboration capsule collection with actress Zooey Deschanel called To Tommy From Zooey.The first pieces of the 16-piece dress collection will arrive at Macy's stores (where Hilfiger has an exclusive agreement) on April 14th, and then a week later at the designer's own stores and on Tommy.com. Few actresses have as well defined of a personal style as the "New Girl" star. Her own vintage styles with a mod, 1960s flair inspire the line (see sketch at right). “I am a fashion fanatic, and I am always looking for new ways to incorporate vintage, feminine pieces into my own wardrobe,” the actress has officially stated. For his part, Tommy calls Deschanel, "very bright and very funny, and really down to earth, the girl next door. At the same time, she has a Jackie O type of chicness to her.” You won't have to be Jackie O to buy the collection, however, which will retail from $98 to $199. Both parties are mum on whether this will be a one-shot deal or an ongoing collaboration, but after a mini-media blitz including print, digital and outdoor advertising, we should how well Deschanel's signature, whimsical style translates into fashion. Have a look at some of Carter Smith's advertising images in the gallery below. 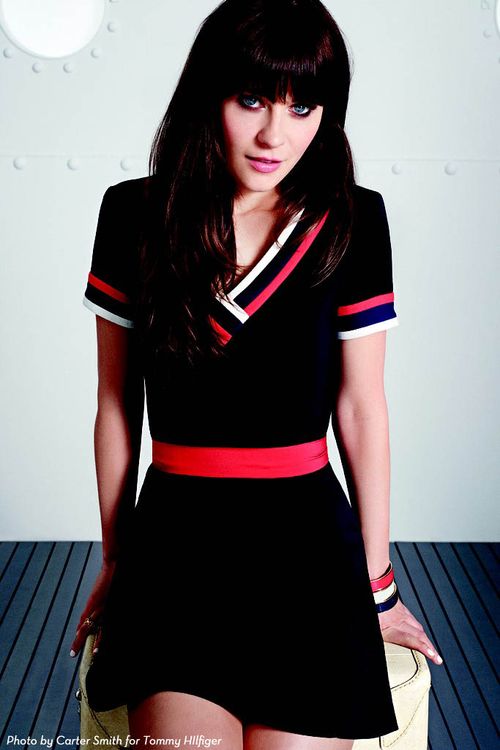