Moschino Is Out & The Kooples Are In

Marshall's To Fill The Loehmann's Void On The Upper West Side 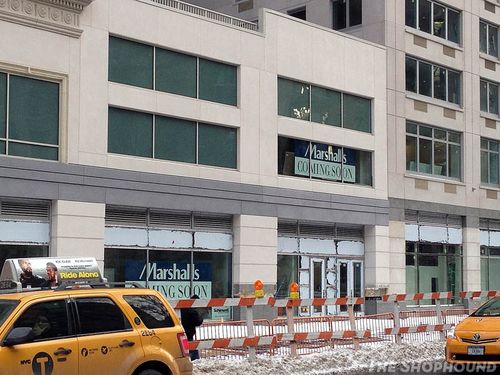 This Marshall's signage which we just noticed in the windows at 2182 Broadway (pictured above) may have been there for a little while, but they have been obscured by scaffolding which has, until now made the southeast corner of Broadway and 77th Street one for pedestrians to avoid as The Larstrand apartment building was being built. Now the corner is clearing up, and we can see that one more branch of the chain discounter soon be opening on the Upper West Side, joining other Manhattan units in Harlem and Chelsea. it seems safe to say that it will probably open not long after the nearby Loehmann's in the Ansonia Building closes its doors for good next month. Not unlike what happened when Filene's Basement bit the dust, one discounter's departure will be replaced with the arrival of another in the neighborhood. Whether it's a fair replacement will be left up to the customers. The arrival of Marshall's as Loehmann's finally dies made us think of Ginia Bellafante's recent piece in The New York Times in which she suggested that the failure of stores like Loehmann's was somehow connected to the rise of sophisticated, curated stores like the Comme des Garçons Dover Street Market that just debuted in Murray Hill.

Really?
She's kidding, right. That's may make a passable essay for the Times, but it's a stretch in logic of any sort. Nobody went to Loehmann's for a curated shopping experience. Loehmann's, as well as Filene's Basement, Daffy's and Syms before it, died because it couldn't stand up to the competition not only from online off-pricers like Gilt Groupe and RueLaLa but also conventional brick and mortar stores like Century 21 who are doing it better. Marshall's is part of the massive TJX Companies which also includes TJ Maxx and Home Goods stores. In recent years, TJX has made a concerted effort to focus on adding more stores to New York City. Loehmann's is closing 39 stores, but TJX has hundreds of locations nationwide. While they may not all hold the bargain treasures that one could once find at Loehmann's, there's no way the smaller chain could compete with the buying power of such a huge corporate entity, and yes, Prada Shoes and Lanvin dresses have been known to appear at Marshall's from time to time. By the same token, the more locally based Century 21 has been furiously upgrading and expanding recently. In the couple of years since it took over the former Barnes and Noble in Lincoln Square, that chain has been the one consistently selling the designer labels the former New York Loehmann's shoppers craved. Even its financial district flagship, once a messy dump by anyone's standards, has been expanded and upgraded to an almost pleasurable shopping experience that is still crowded and inconvenient, ut now much easier to navigate. With the exception of a last ditch updating effort last year, Loehmann's has never been able to catch up with these two chains. Its demise has been something of an inevitability for a while now, but not because of an influx of fancy avant-garde boutiques. They just got beat at their own game.