Dsquared2 Is Finally Headed To SoHo 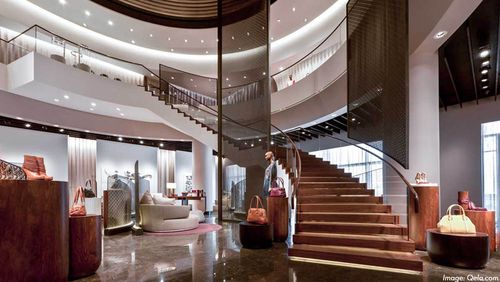 Have you heard of Qela?
Don't worry. Nobody else really has either. Unless you travel to Qatar often, it's not likely you have stumbled across the brand whose only store at the moment is in the capital city of Doha (pictured above), but that's about to change very soon. The brand, which aims to position itself among the Louis Vuittons and Guccis of the world has signed a lease for a 6,230 square feet store on two levels at 680 Madison Avenue between 61st and 62nd Street. You couldn't ask for a better space just a stone's throw from Barneys on a strip of newly renovated stores in what was formerly the Carlton House.

But what exactly is this mysterious new label that has apparently emerged out of nowhere? Qela will open a Paris boutique this Spring, which should give it a somewhat higher profile in the West before it hits New York. A look at its website show the company emphasizing hand craftsmanship and lavish materials in women's handbag, shoe, apparel and jewelry collections, which look elegant and very expensive, if not particularly adventurous from a fashion point of view. That can do very nicely on Madison Avenue, however, at least until the ambitious brand gets a stronger foothold in the consciousness of its targeted cutomer base. Even Prada's meteoric rise in the mid 1990s had decades of of heritage behind it, however, so whether or not this label is prepared to compete on that level creatively remains to be seen. Qatar, after all, is known more for consuming luxury goods than producing them, but that may make it the perfect place to start such a brand. We will all get a better look at what kind of player Qela will be when the store opens this Fall, so just watch. We're predicting a publicity blitz coming in about 7-8 months.