Macy's Plans An Overhaul For Brooklyn 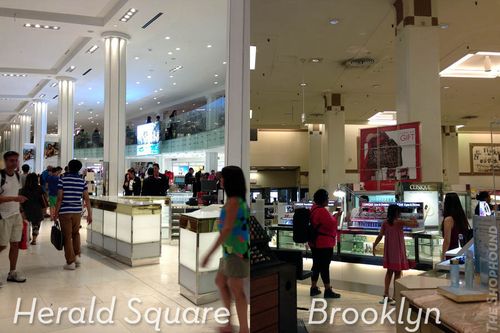 About six months ago, as Macy's was unveiling dramatic renovations to its immense Herald Square flagship, The Shophound took a jaunt over to Downtown Brooklyn to compare the improvements in Manhattan to the state of one of the chains other large, historic stores on Fulton Street (pictured above). We spent some time wandering the floors, noting the building's physical condition as well as its merchandising layout and reported back. It turns out that even as they lavished improvements on their cash cow on 34th Street, Macy's execs have taken a critical look at the big Brooklyn store as well. We wouldn't want to presume that The Shophound had anything to do with this happening, but, well, why not? After all, we both came to the same basic conclusion:
Macy's on Fulton street is a dump.

But not for long. Today's WWD reports that there are big plans to upgrade the building which has been a department store since 1883 when it became the flagship for Abraham & Straus, a local chain that Macy's took over in 1995. As we noted last year, little in the store has been updated since then, though it still includes original Art Deco design elements like a rotunda and a striking elevator bay that will hopefully be preserved. Macy's executives have big plans for the building which will likely become a template for renovations in the chain's many other urban flagships —They're just not exactly sure yet what those plans will be, specifically. “Brooklyn is a fantastic market,” Terry J. Lundgren, chairman, CEO and president of Macy’s Inc., tells WWD. “We are just waiting to figure out the right way to approach the Brooklyn store.” Lundgren notes that as in many department store flagships that date back to the 19th and early 20th Centuries, the current layout actually consists of more than one building cobbled together resulting in complicated floor plates that pose challenges when it comes time for major renovations, so it could be some time before they figure out how to approach the changes to be made.

While there is no specific plan or time frame for the store's renovation yet, Macy's is promising more than just cosmetic improvements for the ever more decrepit store. What is in the works is expected to be a total overhaul of the entire merchandising concept in Brooklyn to serve the rapidly changing market there as well as in other cities whose downtown neighborhoods are undergoing renewal. In recent years, Downtown Brooklyn has attracted new branches from major chains like H&M a few steps away from Macy's as well as Sephora, A|X and Uniqlo. Nordstrom Rack is coming to Fulton Street and Neiman Marcus Last Call has just announced an upcoming store in the Brooklyn Municipal Building. With such competition moving in, as well as continuing gentrification in nearby neighborhoods like Cobble Hill and Carroll gardens, It would have been irresponsible from a business standpoint for Macy's to continue operating one of the biggest stores in the chain in such an outmoded condition. As we noted last July, the renovations that are turning Macy's Herald Square into an upscale palace for luxury brands like Gucci and Louis Vuitton, are making parts of the rest of the chain look like a totally different company in contrast. With a new concept for the Brooklyn store, not only will Macy's show that they care about more than the famous Herald Square flagship, but it might just turn around some customers who had long ago written off the store as an irrelevant mess.

Macy's Eyes New Look for Brooklyn Store (WWD)
Previously:
Retail Renewal: What Does The Macy's Renovation Mean For The Rest Of The Chain?