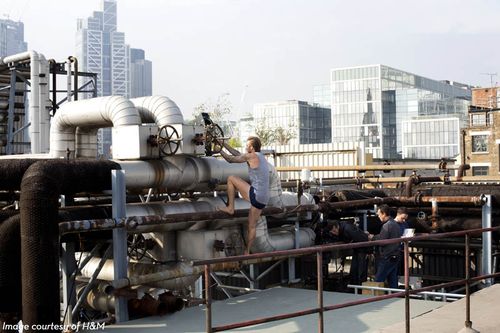 Yes, it's that time of the year again when deep-pocketed advertisers start teasing their extravagant Super Bowl ads. H&M will be returning to the Super Bowl with its David Beckham Bodywear collection in a new, fully enabled "T-commerce" advertisement that will allow viewers to shop directly from a commercial via remote control if they are watching on select Samsung smart TV models. We aren't sure if this is a good or bad thing, but it sounds like the technology that we have been hearing about for years that will allow you to see something on your TV screen and easily buy it right away is finally starting to happen —and the first items available will be men's underpants on the Super Bowl. One might have thought that Victoria's Secret might have jumped on this for their annual hourlong cheesecake extravaganza infomercial/runway show/TV Special, but H&M beat them to it.

But back to what's really important. Notice above a teaser image from the ad which will apparently feature the esteemed Mr. Beckham dashing over rooftops, or perhaps power plants in, of course, his underwear. This is the only image we have to show at the moment, but we expect that there will be more to come which we will bring to you, because we know you care.