Daniel Cremieux Makes A Base In SoHo Don't be fooled by those Nordstrom banners that have appeared outside the old Tommy Hilfiger store on West Broadway. We still have a few more years to wait for a proper, permanent Nordstrom store. They are only there for the Pop-up shop being staged to launch Sarah Jessica Parker's SJP shoe collection this weekend. Tomorrow through Sunday will be the only opportunity to buy the collection in person  in New York City as it will be otherwise available only at selected Nordstrom stores and Nordstrom.com. We had mistakenly thought that the chain would re-purpose its former Treasure & Bond space for the event a few steps downtown, but the former Hilfiger space, yet another store in SoHo that can't seem to find a permanent resident, will serve as a more polished, higher profile venue for the fleeting shop that pretty much everyone is expecting to be mobbed for the duration. We got a bit of a peek inside (through the window) to see the shop pretty much set up and ready for business. It appears that there will be a few apparel and accessory options available to complement the SJP shoes, if that rack of trench coats is any indication. Our friends at Racked have ascertained that Parker herself will be making her appearances at the store on Friday at 10am, Saturday at 3pm, and Sunday at 11am which is essential information if you either want to make sure you get a chance to see the Actress/Designer/Perfumer herself, or are a terribly blasé New Yorker who couln't care less about seeing celebrities and wants to avoid the most frenzied shopping times.

Have a look at the gallery below for a few more views including store hours and a peek inside. 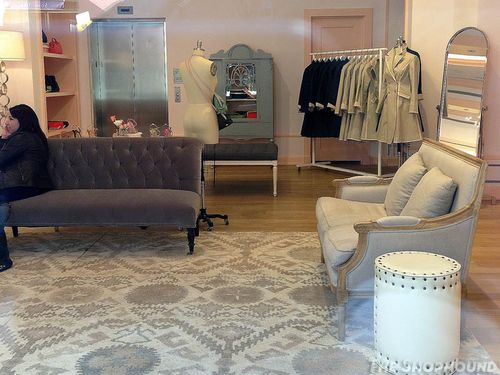