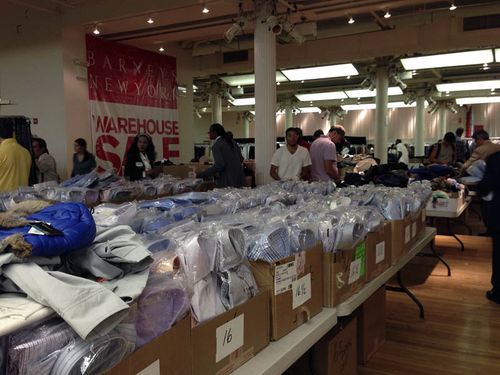 This time last year, The Shophound and other like-minded sale shoppers, were preparing for the last Barneys Warehouse Sale in its location on 17th Street in Chelsea.
Pretty much all of us discovered that it sucked, most likely because Barneys had, smartly, launched a Warehouse e-commerce site. This was where most of the store clearance merchandise we all expected to find at the sale had been diverted, leaving not much to choose from for the faithful shoppers who had been lining up on 17th Street season after season for a long-awaited bi-annual bargain hunt. Still, Barneys promised that even though they were losing the location due to building construction, they would be staging the sale again at the end of the Summer at the Metropolitan Pavilion (pictured above).
That one sucked even worse.
In fact, a good portion of the goods available there, particularly among the women's offerings, looked like nothing that had ever seen the inside of an actual Barneys store. The hordes of regular Barneys Warehouse Sale shoppers made their opinions quite evident by their conspicuous absence, so it comes as no surprise that February has rolled around with no announcements as to when the next Warehouse Sale will take place.
And that's just fine.
At the last sale, we felt that if Barneys couldn't stage a Warehouse Sale that lived up to its storied reputation, then they shouldn't bother doing it at all. Moving the sale online made perfect business sense for numerous reasons, and there was no longer any point to the walk-in sale. Apparently the folks at Barneys feel the same way.
We would rather take a moment and remember the Barneys Warehouse Sales when they were full of things that were totally worth ruthlessly shoving somebody out of the way for (not that we would ever have actually engaged in such behavior), and then remind ourselves that between sample sales, Gilt.com and the like, and good old end of season clearance sales, we still manage to find more bargains that we have room in our closet for (and you probably do too).
So R.I.P. Barneys Warehouse Sale. They were fun while they lasted, but nothing lasts forever.