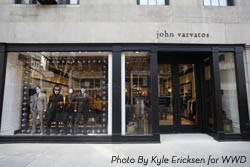 Though we aren't there every day, The Shophound tends to keep an eye on the comings and goings on Madison Avenue, but we were have to admit that we hadn't noticed that John Varvatos was getting ready to take over Dennis Basso's former store near 66th Street. According to WWD, the store opens this week, and represents the designer's third New York store joining his luxe flagship in SoHo and the Rock & Roll inspired location in the former home of CBGB's on the Bowery. At 4,200 square feet, his newest outpost is Varvatos' first freestanding foray uptown, and has its own special character. Meant to replicate the ambiance of an elegant Upper East Side apartment, it has been designed with touches inspired by the designer's own home.  Thanks to recent private equity investment, we can also expect more new stores from the designer as his business expands worldwide, including scheduled openings in London and the Far East, but more upcoming stores in New York are also a likely possibility, and soon. “New York is such a small city, yet it’s so big at the same time,” Varvatos tells WWD. “We could possibly have stores on the Upper West Side and downtown. We’re looking at the World Trade Center.” His popular footwear and accessory lines could get their own homes, just don't expect the designer to return to womenswear anytime soon. "It’s always a consideration," the designer says, but right now it appears to be more of a back-burner concern while Varvatos prepares his new record label for it's first releases.
That's right, a record label.
Look, if Tom Ford can direct movies...