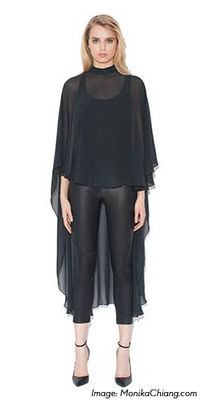 Last week's trickle of Sample Sales has opened up to a substantial stream, for now, as some designers clear out the odds and ends of what's left in the warehouse. Most prominent is the MONIKA CHIANG sale that started yesterday at 225 Fifth Avenue. Backed by Chris Burch, the former Mr. Tori and the man behind the C. Wonder phenomenon, Chiang has denied longstanding rumors that her label is kaput, but the prices at her sale have been reported in rock-bottom, help-us-get-rid-of-this-stuff giveaway terms. Her stores have closed, and there is no product on her website newer than Fall 2013, so if her business isn't shutting down, it is doing an awfully good imitation of one that is. Having established that, there is reportedly plenty of very nice modern sportswear (pictured at left) available there for not a lot of money including leather items and lots of footwear.

Also currently running is CLUB MONACO's seasonal sale at Clothingline in the Garment District. Here is another great resource for sophisticated basics with most items well under $100. Shoppers should be warned that while there is lots of stock, there are also quite a few samples for men and women and occasionally some damaged items, so shop with a sharp eye.

For the luxe-minded, J.MENDEL is staging a one-day-only sale this Thursday at the Union Square Ballroom that will feature accessories, eveningwear and, of course, plenty of furs —basically everything you would want to find at a J.Mendel sale. Though it promises up to 75% off, that can still mean prices will easily run into four figures or more, so this one is really for the serious spenders.

For those willing to venture out of Manhattan, BROOKLYN TAILORS is offering deep discounts starting this Thursday on its meticulously made off-the-peg collection at its Grand Street storefront in Williamsburg. The sale will feature mostly menswear, but we hear that there will be a few women's samples available for a lucky sample-sized few who are looking for a tailored look.

See details on these and more upcoming sale events can be found in our SALE ROLL at left.