Where Will Gant Move Its Fifth Avenue Flagship As Blancpain Moves In?

The spectacular Jean Paul Gaultier exhibition at the Brooklyn Museum is over, and the Charles James show at the Costume Institute doesn't open for a couple of months, so what are you to do if you are jonesing for a fashion exhibition? it turns out that the Museum at FIT is literally full of shows with three running at once right now, and that should hopefully satisfy your needs, at least for a while. 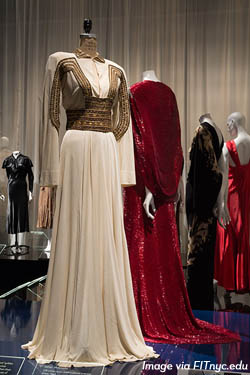 First up is the recently opened Elegance in an Age of Crisis: Fashions of the 1930s which explores the curious notion that the 2oth Century's most economically challenged decade was also the one where modern fashion for both men and women fully took shape, literally. If the 1920s were all about glamorous but radical change and social upheaval after World War I, the 1930s where when things settled down aesthetically, and women turned to more traditionally feminine styles but without the restrictive undergarments that made previous, shapely styles possible. Enter legendary innovators like Madeleine Vionnet's revolutionary bias cuts that remain a mainstay of eveningwear today. Sports fashion, swimwear and modern men's suits all have their roots in the 30s, and there are plenty of dazzling gowns including Adrian designs for Joan Crawford and Katherine Hepburn (at left) that wouldn't have looked out of place at the Oscars last weekend —fitting since the 1930s is when the public started to look for Hollywood for fashion cues. 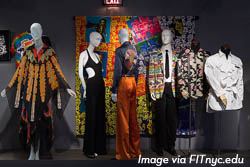 Once you are done with that, you can proceed on to Trend-ology, (pictured at right) a smaller exhibition upstairs that shows how travel, trade, technology and historical events created trends that evolved the way we dress and even periodically reappeared over decades. Did you know that the original camouflage fashion craze happened back in the 1940s? 100 garments and objects represent emblematic styles going back to the 18th Century that help to explain why paisley patterns, plaid and even biker jackets have become recurring favorites. 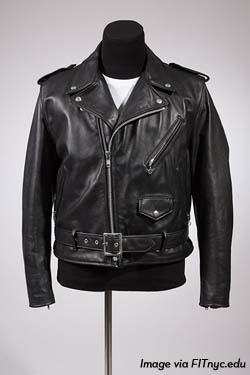 And speaking of biker jackets, there's one more morsel of dessert left at FIT, Beyond Rebellion: Fashioning the Biker Jacket organized by graduate students in the Fashion Institute of Technology’s MA program in Fashion and Textile Studies: History, Theory, Museum Practice. This brief show chronicles the history of that emblematic Schott Perfecto jacket (pictured at left) that is once again a coveted item in all its various incarnations from the original to versions by designers as diverse as Carolina Herrera and Rei Kawakubo of Comme des Garçons.

That should keep you busy for at least a couple of hours. Go see them all at once or one at a time. See them as many times as you want because one of the best about the Museum at FIT remains that it is free, free free.