Can Supreme get The Masses To Line Up For Brooks Brothers? 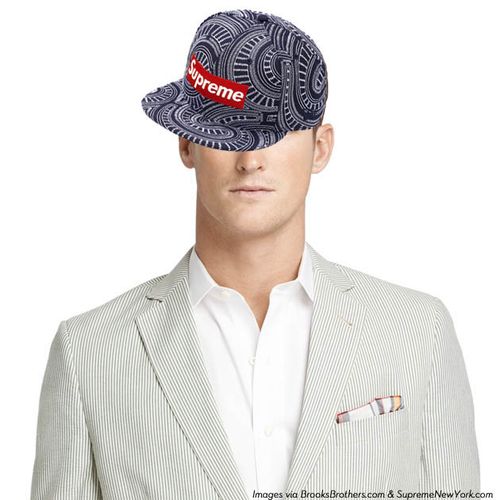 We already know that Supreme can cause mayhem when it launches an exclusive Nike collaboration. Last week's Nike Air Foamposite 1 release had to be shut down by the police when Lafayette street became too chaotic to sell the shoes in the store at all. When Dover Street Market opened late last year, a good portion of those waiting to get in were there only for another exclusive Supreme product launch, so can the arbiter of the last word in covetable skate and streetwear lend its cool factor to buttoned-down Brooks Brothers?

We will find out next week when the two retailers join creative forces to release an exclusive seersucker jacket and pants. While there are no images yet, the two pieces will be based on the haberdasher's slimmer Fitzgerald model and spiced up with a splashy star-printed lining. It will be available only through Supreme, while supplies last, which typically isn't too long for them. “Supreme was looking for something that was iconic to Brooks Brothers and they thought that their customers were sophisticated enough for a nice suit,” Brooks Brothers' fashion director Glen Hoffs tells WWD. Seersucker being one of Brooks' signature materials, makes it the perfect choice to introduce the brand to Supreme's faithful followers. Whether this is a one-off, or the beginning of a long-running collaboration remains to be seen, but if you notice a lot of skateboarders in seersucker suits this Summer, then we should probably expect more from this unlikely team-up.