UNIQLO Has Created A Michael Bastian Boutique In The SoHo Store

Gearing Up Before May Madness With A.P.C., Jay Godfrey, United Bamboo & More

Rumors Now Have Saks
Heading To The Financial District 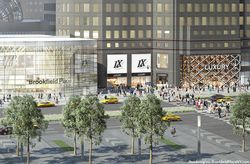 News about stores heading to various locations underconstruction in the Financial Disrtrict is dominating this week's retail news. This time, it's Saks Fifth Avenue that is said to be close to signing a lease to anchor Brookfield Place's upcoming retail complex in what was formerly known as the World Financial Center on the West Side Highway (rendering at right). Though nothing has been confirmed, the rumor is featured in a front page article in WWD, which lends it more credibility than some other publications might be able to offer. The surprise here is that nobody thought there was enough room in the complex to accommodate the full-line Saks store that is expected to be announced. According to WWD, Saks would combine two separate spaces, of 20,000 and 25,000 square feet and possibly add more. If a full-sized Saks branch were to open downtown, it would make it the first major department store with two full locations in Manhattan if it can beat Barneys return to its original Chelsea home which is still a few years off. Bloomingdale's in SoHo, in contrast, is a specialty concept store that presents only select departments from its regular assortments, excluding the home collections and many apparel departments that are typically found in its branch stores.

This rumor is more convincing than some others because the chain's new owner, Hudson's Bay Company, is eager to exploit its new property, and its new president, Marigay McKee has been emphatic about building up Saks' luxury quotient. What better way way to showcase that than with a brand new, high profile store in New York City. That's not all the Saks has planned for the neighborhood, however. It is reportedly planning its first Off 5th outlet store east of Vesey Street that would compete directly with Century 21's recently expanded and upgraded flagship a few blcks across town. While the area has a long history of discount shopping, it is still unproved as the kind of luxury shopping area that is currently being built and aggressively marketed to potential tenants. Though it probably wouldn't be ready to open by next Spring when Brookfield Place's retail complex is expected to open with signed stores like Hermès, Ferragamo and Zegna, a powerhouse anchor like Saks could ultimately attract shoppers in a way that a collection of boutiques cannot, which would go a long way toward establishing the Financial District as a real (as opposed to potential) shopping destination. Expect to hear a lot more about Saks and other proposed arrivals to the area in the coming weeks.