Gearing Up Before May Madness With A.P.C., Jay Godfrey, United Bamboo & More 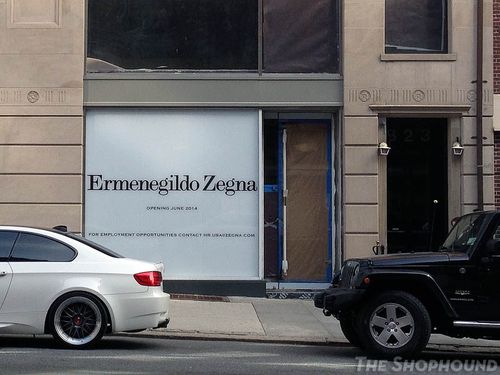 Following the most recent luxury retail pattern, the window pictured above tells us that Ermenegildo Zegna is about to join the growing pack of designers who are covering all the bases of New York luxury shopping with a flagship on Fifth Avenue and a second boutique on Madison. Zegna's first sattelite store is expected to open in a couple of months at 825 Madison Avenue right between Valentino and Dennis Basso just south of 69th street. It will obviously be a smaller affair that Zegna's brand palace on Fifth, but it will also place the brand among a cluster of sophisticated men's stores in the area including Luigi Borelli, Cesare Attolini, Lanvin and the return of Simon Spurr as the designer for the upcoming Kent & Curwen boutique. But that's not all. Zegna is also listed among the designers signed for stores in the financial district's Brookfield Place shopping center. Whether it will be a full-line Zegna store, or focus on the casual Zegna Sport or more fashion forward Z Zegna collections remains to be seen, but it is expected to open in about a year as Brookfield is slated to debut its re-imagining of the former World Financial Center by then.

What this all means is that the city will soon be wash in luxury shopping whether it is in long established shopping areas (Fifth, Madison Avenues), burgeoning enclaves (SoHo) or new, ambitious real-estate development driven complexes with promising demographics but no real heritage as concentrated carriage trade locations (Brookfield Place, World Trade Center and Hudson Yards). We will see how all this shakes out in a few years. Does Manhattan need so many different high-end retail neighborhoods, or have the city's wealthy tourists and residents been under-served all along by not having enough places to shop?