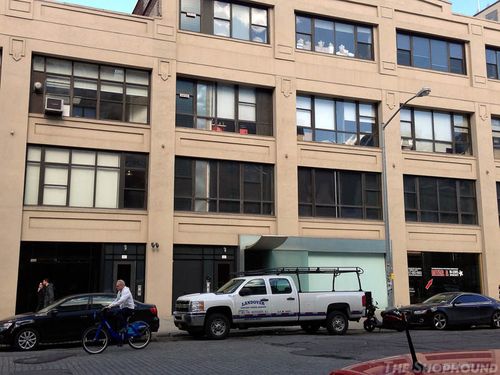 Last month, The Shophound was struck by how many retail spaces in the ostensibly hot Meatpacking District were empty, and had been so for months on end with little to suggest that things would change anytime soon (pictured above). Over the weekend, Steve Cuozzo at The New York Post points out that this has become a citywide problem, pointing to the intersection of Third Avenue and 61st Street where, one block north of busy Bloomingdale's, three out of the four corners are hosting long-term vacancies. He notes that nobody has actually quantified all of the available space in a New York and what it is being asked for it. We really don't have the statistics to tell us how bad this problem is, but our eyes can tell us that something is amiss, or worse. "It’s a shame," he writes, "because window-shopping is more fun when there’s something in the window prettier than a broker’s name and a promise that the dark hole is “prime.”

While real estate brokers are hard-selling major newly developed and redeveloped properties downtown in the Financial District and at Hudson Yards in the far West 30s as new luxury shopping destinations, there appears, to the casual observer, to be no shortage of empty storefronts not just in the Meatpacking District and on the wealthy Upper East Side, but also in Chelsea and on the Upper West Side, and Murray Hill, and pretty much everywhere else in the city that isn't Hudson Yards or 3 and 4 World Trade Center or Brookfield Place or the soon to be gleaming new South Street Seaport Pier 17. Why, if there is such an abundance of retail opportunity in Manhattan, are so many affluent neighborhoods looking nearly blighted with empty stores, many of which until recently held long term and often beloved local businesses pushed out by onerous lease renewal terms?

Cuozzo offers more than a few explanations. Greedy landlords are simply overestimating the value of their retail spaces or are forced to overvalue them in order to secure construction loans. Many buildings are now under foreign ownership by landlords who have no idea how the New York real estate market works and have been known to routinely disrupt lease negotiations with new unrealistic demands and conditions that destroy nearly completed deals. The development boom has created more space that New York's merchants actually need. The 10 to 25 year-old leases coming up for renewal were in many cases signed when the city's retail spaces were undervalued and so most renewals will reasonably include some kind of substantial increase for which tenants are often unprepared. Landlords are increasingly willing to throw over the independent storeowner for a "credit" tenant like a bank or a national chain whose ability to meet costs are less dependent on business in a single location. The building owners are content to leave spaces empty for extended periods until they finally get these tenants, many of which create shopping stretches composed of banks alternating with drugstores and little else. These are just a sampling of the factors that have caused a disturbing disconnect in the cost of retail space and the number of vacant stores waiting to be filled.

If these empty retail spaces were dresses hanging unsold on a rack, they would get marked down until they attracted customers. Sadly, real estate does not seem to operate under the same principle. Cuozzo offers a few solutions, including some common sense remedies like more reasonable appraisals of what some landlords should be demanding in rent, and easing some of the arcane regulations facing new storeowners and particularly restaurateurs. he also points to the Upper West Side's new regulations regarding the size of new storefronts in certain areas. Meant to discourage large big box stores from shutting out smaller players by commandeering whole blocks, the rules may have had a chilling effect on leasing any space at all. The most important step, however is for the city's real estate forces (and government) to recognize that there is a problem at all. They seem so busy promoting shiny new projects, that they don't seem to notice that scores of empty stores are damaging neighborhoods and mitigating the appeal of the expensive apartments under which they sit. "Is it in anyone’s interest to have so many empty windows?" Cuozzo asks, "We’re becoming a city everyone wants to live in — with no places to shop."

Why a booming Manhattan is full of empty storefronts by Steve Cuozzo (NYPost)
Previously:
Space Available: There Are A Lot Of Empty Stores On 14th Street In The Meatpacking District