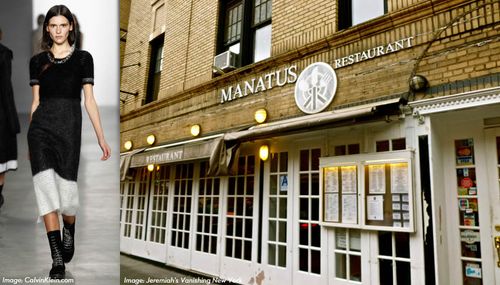 The last place to get a full, well priced meal on the designer stretch of Bleecker Street bewteen Christopher and Hudson Streets closed last night amid rumors that a Calvin Klein boutique was coming in to take over the space. Not too many West Villagers sound pleased to say goodbye to the Manatus, a three-decade or so fixture just off Christopher that has reportedly been the kind of friendly (and affordable), neighborhood Greek diner that seems to exist only on TV shows anymore. The restaurant's demise was forewarned nearly a year ago by Jeremiah's Vanishing New York, which followed up over the weekend with the news that its rent would have been hiked up to $50,000 per month if it had stayed. Calvin Klein rumor also stems from the blog, and it makes a certain amount of sense that a designer label which would require a certain amount of room would jump on one of the rare large scale spaces on Bleecker to become available. As a remnant of Bleecker Street's only slightly humbler past, Manatus was something of an outlier among the fashion and beauty stores, but that's not to say that designer shoppers don't need a place to sit and have a nice club sandwich.

Now to Calvin. If the brand is indeed interested in (or even already in control of) the space, one presumes that it would be to open a new Collection boutique, which would be only other one in America besides the flagship Madison Avenue store. Francisco Costa's designs for the premium label have thrilled critics and red carpet denizens in the years since he took over for Calvin himself. Unfortunately, Costa's different design point of view, changes in production arrangements and the introduction of the mid-range department store Calvin Klein label have decimated the brand's high-end women's business over the years. New management at the brand and at parent company PVH has vowed to reverse this state of affairs and refocus some corporate attention on its top label. A brand new boutique in a hip location could go a long way to burnishing Calvin's status among customers. Keep an eye out for some signage on Bleecker Street to let us know more, and keep walking toward Seventh Avenue if you are getting hungry.