Is Restoration Hardware Planning A Megastore In The Pastis Building? 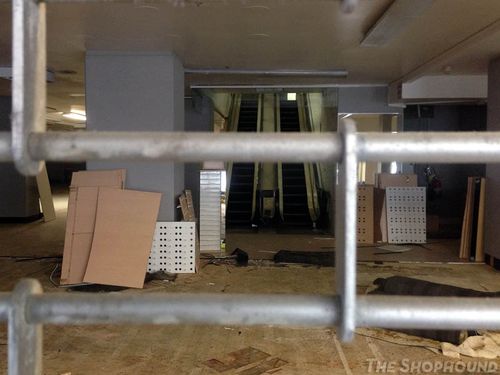 Since Loehmann's shuttered a few months ago, its Seventh Avenue flagship store has been silent as we await the construction activity that will return the site to its previous tenant, Barneys New York —until yesterday that is.
As The Shophound happened to be strolling past the building we saw, for the first time, construction workers finally dismantling what was left of the interior when Loehmann's vacated as the debris was hauled out through the front door. Soon, the façade will likely be covered in plywood, but for now, you can peer in past the metal gates in the windows to see the store stripped for what we expect will be a gut renovation. You can still see the escalator in the same place where it was in the days of Barneys I. It will likely remain there when Barneys II opens, mainly because escalators are incredibly expensive to construct and move. We can't help seeing the store as it once was in the 80s and 90s when what you can see in the picture above was part of the men's furnishings and shoe departments, as if that Loehmann's interlude was all just a bad dream.
We know that when Barneys II opens in 2017 it will bear little resemblance to its progenitor at Seventh and 17th, and we are prepared for an approximation of the marble, steel and glass design scheme that now pervades the Madison Avenue flagship, but we can't deny that we are still anticipating the rare occasion of seeing a once beloved store return to the home it never really should have left.