A Goyard Boutique Is Coming To NYC

CFDA/VOGUE Fashion Fund Finalists Will Return To TV This Fall 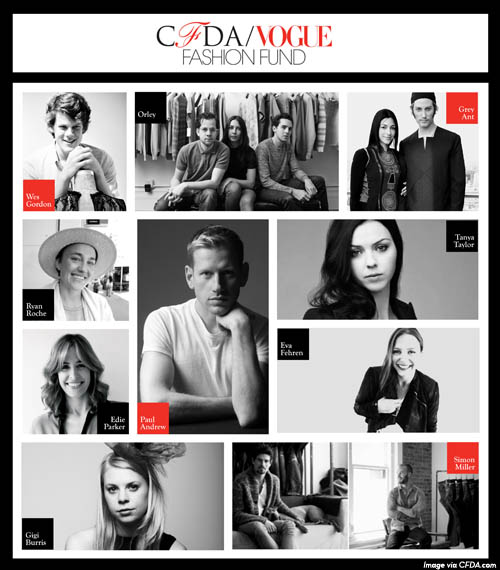 Last night, the CFDA/Vogue Fashion Fund finalists were announced and here they are:

Some of these labels like Grey Ant and Simon Miller may be more familar names while others like Orley have only just arrived on the scene. The finalists will be put through a series of design challenges over the Summer including one underwritten by Maybelline and a fashion show in Los Angeles sponsored by online retailer The Corner. The winner will receive a $300,000 prize and tow runners-up will get $100,000 as well as mentoring from veteran CFDA member designers. Again, this year's three prize recipients will also create capsule collections for the Fund's sponsor partner, J.Crew. Participating in the program at all has been a great boost for any young designer. Last year's winners, Dao-Yi Chow and Maxwell Osborne of Public School have gone on to win nearly every possible award they have been eligible for recently, so it's a great launching pad. Once again, the public will get an insider view of  how the winners are chosen as this year's finalists will also participate in a TV docu-series, The Fashion Fund which will be broadcast on the Ovation Network (That's Channel 83 on TimeWarner in New York City). While the last series, its debut, was broadcast several months after the 2013 winners were actually announced, the next edition will air closer to this year's announcement on November 3, so there should be a greater sense of suspense while watching the show this time around.