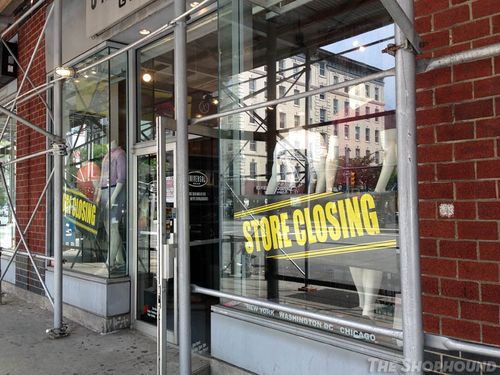 Eighth Avenue is losing yet another of its gay mainstays as Universal Gear has announced that its Chelsea store will be closing at the end of July. As usual, the closure is the result of a rent hike (as confirmed by the tireless chronicler Jeremiah's Vanishing New York) that made maintaining the store unfeasible. Universal Gear is one of the last remnants of Chelsea's recent past as the epicenter of Manhattan's young gay community having taken the tiara from the West Village at the beginning of the 1990s. Where will you pick up your free weekly issue of Next Magazine or buy tickets to any number of gay club events? All signs point to Hell's Kitchen, which inherited Chelsea's mantle about a decade ago, and where Universal Gear's other store will remain open for the foreseeable future (along with its original Washington DC store). As for Chelsea today, even though it has already lost The Rawhide, Rainbows & Triangles, The Big Cup, and so many other independent establishments that gave it its unique flavor over the years, the neighborhood hasn't been totally neutered just yet. After all, G Lounge, Barracuda and Nasty Pig are still thriving on the side streets, and it's hard to imagine Rufskin existing anywhere else in Manhattan. Nevertheless, there will still be sighs of disappointment when a bank or something else equally banal moves in to the store where "bathing suit section" meant racks of reliably tight and skimpy Speedos just waiting to be shown off on Fire Island instead of a bunch of baggy board shorts.