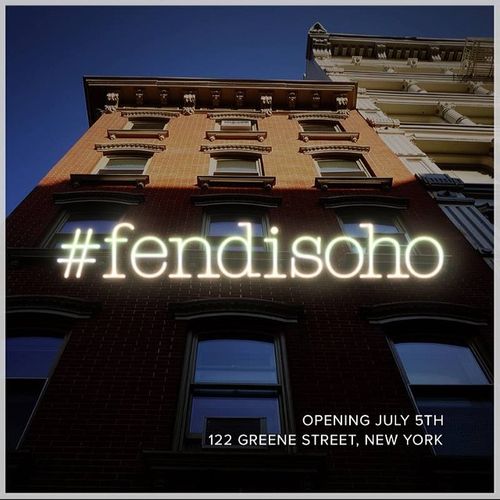 We can now count Fendi among the international luxury brands that have added a downtown outpost to their midtown brand palace flagships —at least for the next six months. They may be a bit late to the game (with Chanel, Louis Vuitton, Tiffany, Burberry and Saint Laurent beating them to it to name just a few) but the legendary Roman leathergoods brand quietly opened a temporary store on the corner of Greene and Prince streets in SoHo just this past Saturday (announced on Instagram above). 122 Greene Street, formerly the home of Wolford, will now host a Pop-up Fendi Store through the end of the year featuring a revolving monthly theme including special one-of-a-kind items unavailable in any other Fendi store. This month offers "Minis" which presents small versions of popular Fendi handbag styles like 2jours, Peekaboo and Selleria in a stripped down, bare brick environment with an amusement arcade decor that shows merchandise in the whimsical customized vending machine displays first seen at Fendi's London pop-up at Harrod's last season.

Beyond the general excitement of a new luxury store, the new store marks a new expansion effort from the label that also includes a move of it's main flagship from Fifth Avenue to the corner of Madison Avenue and 57th Street. It's more than likely that this pop-up, if successful, will be a precursor to a more permanent position in downtown Manhattan. “SoHo is one of the most vibrant shopping destinations in the world for local and international customers,” Fendi chairman and CEO Pietro Beccari tells WWD. “It is important for Fendi to secure its presence here and we are fortunate to have the chance for the next six months.” While the 630 square feet at 122 Greene Street may be a little on the small side for a brand with as much to offer as Fendi has, don't be surprised to see the brand showing up in a permanent home sometime in the next year or so. In the meantime, have a look below at Fendi's promotional video below before you head down to Soho to check it out in person.

Fendi to Pop-Up in SoHo (WWD)