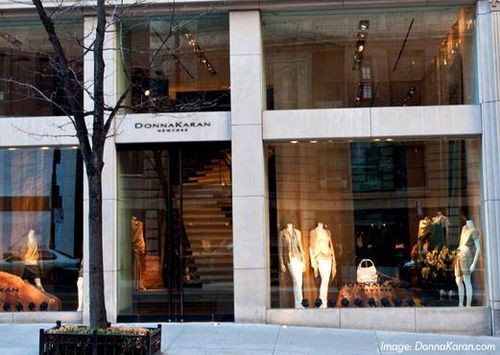 Donna Karan
may be luxuriating on the Hamptons for the Summer, but her flagship Collection boutique on Madison Avenue (pictured above) will be homeless by the end of the Summer. WWD reports that the 13 year-old store at 819 Madison between 68th and 69th Streets will close when its lease expires at the end of August. There were no specific details about why the store was closing, or where it might move beyond a statement from the designer's spokesperson announcing the planned closure and stating, "At this time, we are exploring other opportunities for a space more reflective of the spirit of our brand today." One can only presume that the inevitable rent hike that would have accompanied a lease renewal must have been a factor in the decision to close the store, but there may have been business concerns as well. While the DKNY brand remains a significant business, Karan's signature label is no longer the powerhouse with a fiercely loyal following and prominent placement in department stores that it once was. Now owned by LVMH, The Donna Karan New York label has lost ground at the high end to international luxury brands like Gucci and Prada and even hometown competitors like Michael Kors. The expense of a Madison Avenue boutique in such a prime location may not have been justified without some kind of resurgence from the brand. Karan will still be represented in the city with DKNY boutiques, and the designer's own Urban Zen fashion and wellness store in the West Village, which she owns separately from her eponymous brand. There are still 11 other Donna Karan Collection boutiques that are expected to remain open, but few of them have the prestige or visibility factor of Madison Avenue, so the question remains, if, when and where the store will reopen that will have a similar impact?