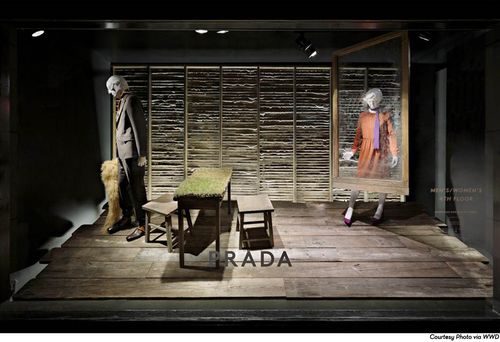 Sometimes luxury retailing can seem like a tabloid story, which is what happened three years ago when Barneys and Prada announced that they had parted ways. Industry watchers were dismayed, to say the least, when it was announced that the retailer would stop carrying accessories and women's apparel from the luxury brand whose rise in prominence during the 1990s parallelled its own. How could you have Barneys without Prada? Well, they never totally split as the store continued to carry women's shoes and all the men's collections, but still, there seemed to a glaring absence at Barneys as it went about its dramatic makeover. That rupture has now been healed as the store quietly announced the return of Prada womenswear this week with dramatic Madison Avenue windows inspired by 20th century German cinema (pictured above) and new adjoining boutiques for Prada's Men's and Women's clothing on the fourth floor. WWD's Bridget Foley goes behind the scenes in today's issue, though seh never fully explains how the two parties resolved their differences beyond proclaiming that they are stronger when working together than apart. Though Prada was booted from the store when it insisted on leasing its women's clothing and accessory spaces —a practice that Barneys does not engage in as a matter of policy— Foley declines to elaborate on the arrangement that brought the label's womenswear back to the store. Prada now leases its accessory department in Saks, as well as separate men's and women's accessory boutiques in Bloomingdale's which have opened subsequent to its departure from Barneys. More than likely, Prada saw that the volume of business Barneys does with the brand was not made up by other doors after the change was made, and so it softened its insistence on leasing. Foley notes that Barneys still does not carry Prada's handbags, which leaves Bergdorf Goodman as the only department store that carries all of its product categories, which are all also found in smaller assortments at Jeffrey downtown. When Barneys and Prada went on a break, Bergdorf Goodman had only just fully repaired its lengthier and deeper rift with the label which had left the store without any of its products for nearly a decade. Bergdorf's has an equally strict non-leasing policy, and the structure of its new agreement with the brand may have informed how Barneys and Prada got back together, but this rapprochement may ultimately say more about how luxury department stores and lease-happy key labels will deal with each other in the future. Stores like Barneys, Bergdorf's, Neiman Marcus and Nordstrom tend to avoid lease arrangements, making a singular exception for Louis Vuitton who does not wholesale at all anymore. Saks and Bloomingdale's, however, have become increasingly hospitable to them. Gucci recently took over all of its boutiques in Saks with the exception of shoes, and the store has several other leased departments sprinkled throughout its New York flagship. Bloomingdale's has added prominent leased Prada and Gucci shops recently in addition to its longstanding LV boutique and other accessory brands that have added luster to its main floor. More quietly, it also has several leased apparel departments throughout the store including ones from hot contemporary labels like The Kooples, Maje, Sandro and Zadig & Voltaire. When Prada left Barneys, it was thought that major luxury vendors would begin to have the upper hand with retailers in demanding how their wares are presented in stores, but its new arrangement suggests that the stores may still be able to call the shots if they can maintain their prestige and, more importantly, prove that they can sell goods at a level that is ultimately indispensable to the big brands. Ultimately, we are guessing that it was sales volume that brought Prada's women's collection back to Barneys, because as much as both parties like to talk about fashion and art, business is business after all.