Not A Retirement Community Edition 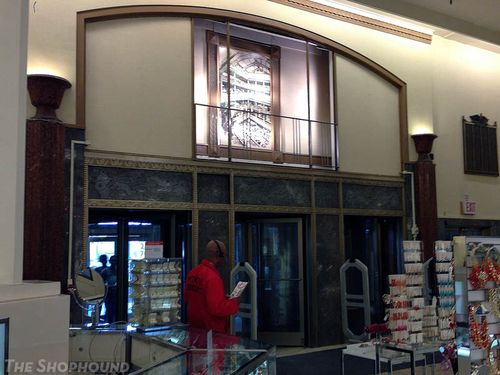 Almost a year ago to the day, The Shophound took a jaunt down to a store we would ordinarily not have gone out of our way to visit, the Macy's flagship store in Brooklyn (pictured above).We were curious to compare state of the city's other sizable Macy's to the lavish renovations that were happening in the mother ship at Herald Square. What we found was a dingy mess of a store, but one that inhabited a historic Art Deco structure that still had some elegant bones that could have been unearthed and polished. The potential for a thoughtful, transformative renovation was high, especially since the store was well situated on a resurgent Fulton Mall and only blocks a way from Boerum Hill, Cobble Hill and Carroll Gardens —what is now one of the borough's most affluent areas. About six months later, Macy's announced that indeed they were planning to refurbish the Brooklyn store to take advantage of those very things, but now WWD is reporting that the planned renovations are on hold, and may never happen. In fact, real estate in that section of Brooklyn is now so valuable ($300 - $400 per square foot) that Macys could stand to make $300 million by selling the historic building at 422 Fulton Street, demolishing it and redeveloping the site to include a new residential tower which would feature a smaller, more productive brance of Macy's on its first few floors, not unlike the the Nordstrom tower currently under construction in Manhattan. No officials from either Macy's or potential developing partners had any comments for WWD, but its sources point out that the existing building, which was originally the Abraham & Straus flagship before it was absorbed into the Macy's chain in the 1990s, is actually a combination of a few buildings with inconsistent floor plates and levels that don't line up easily from floor to floor. A proper renovation would likely be extra costly even by New York retail standards, so the idea of having a more efficient, newly built store that was "right sized" for the neighborhood would be very attractive to practical minded Macy's executives.

Of course, there is also potential in revitalizing a historic building. In its current, dingy state, Macy's Brooklyn is not attractive to the upscale communities in its backyard, but a real re-imagining of the store could unlock a valuable customer base nearby that could justify the store's large size, particularly in kitchen, bed, bath and other home goods departments that aren's as well represented in the area. That would be a nice thing for fans of historic department stores to imagine, but given the current manic character of New York real estate development and its insatiable appetite for glittering luxury towers, the demolition option seems more likely at the moment. While no firm announcements about the store's future have been made, anyone with any affection for the city's grand, old retail palaces —even the ones which aren't terribly well maintained— may want to take a visit to Macy's Brooklyn flagship. it may not be there for much longer.