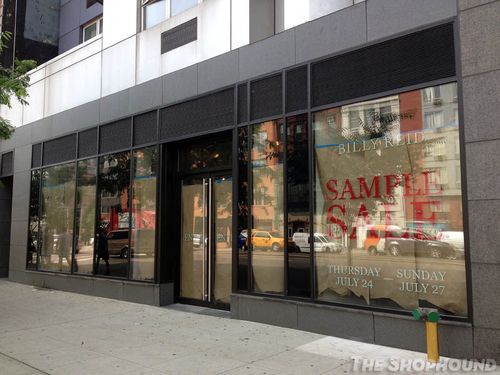 As with everything during the second half of the Summer, the sample sale schedule has quieted down, but that doesn't mean that there still aren't occasional bursts of activity like the BILLY REID Sample Sale that starts tomorrow across the street from his NoHo boutique (pictured above). Reid has typically been something of an occasional participant on the sample sale schedule, so there's no knowing when the next event will be, but when he does hold one, it turns out to be something of an event. He has taken over a prominent storefront, and will be offering not only his usual apparel and shoes, but also furniture, rugs and bolts of fabric, so come prepared.

If you can't make it to the big Theory/Helmut Lang sale at Clothingline that ends tomorrow, then don't worry, because there's another HELMUT LANG sale starting on Thursday as well on West Broadway in SoHo with all-new women's merchandise. It's a little tough to keep up with all of the Theory and Helmut Lang sales. Iit seems like there's always another one around the corner. We couldn't tell you why there is always such an abundance of excess merchandise from these corporate sibling labels, but take advantage while you can.

Also on repeat mode this week are VIVIENNE TAM with a Garment District sale starting today, and newly inducted CFDA member ERNEST ALEXANDER, whose sale is in now in the NoMad neighborhood. Socially conscious label EDUN is also holding a sale today and tomorrow in SoHo which will be donating 25% of the proceeds to St. Anne's Infant & Maternity Home. Pant wizard ALVIN VALLEY is back in business, which means he has a sale as well through Saturday in Western SoHo/Hudson Square, and finally, hat fans of all persuasions will enjoy top milliner EUGENIA KIM's sale running through tomorrow in the Garment District. See out SALE ROLL at left for details on each sale including late breaking announcements.

Posted at 12:30 AM in SALEsaleSALEsaleSALE | Permalink | Comments (0)