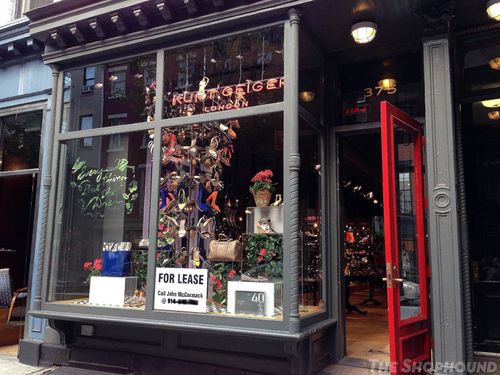 There has been plenty of fallout from the recent sale of the immense fashion conglomerate Jones Apparel Group to private equity firm Sycamore Partners, but one of  most prominent effects has been the spinning off of several former Jones brands into independent firms. One of them, popular London based shoe brand Kurt Geiger, was only acquired by Jones in 2011, and made a major statement about its plans for the as yet untapped U.S. market by opening a showcase of a store at 375 Bleecker Street about a year and a half ago in a shop that had most recently housed a few ill fated attempts by Tommy Hilfiger to develop new retail concepts. It looks like Kurt Geiger, which recently became an independent company through a management buyout from Sycamore, is now adjusting its own plans for the U.S. While no specific announcements have been made, the prominent "For Lease" sign in the window makes it clear that the brand is, at the very least, not long for Bleecker Street. Whether it is moving the store to a more prominent location or simply putting its entire U.S. retail plan on hold for the moment is unclear, but it does put Bleecker Street in the same category as so many other supposedly hot Manhattan shopping neighborhoods that suddenly have a surplus of retail space available. With Geiger's Departure, Juicy Couture's prominently empty corner store, as well as the closed Manatus restaurant and several other vacant stores on its same block, There is a lot of space available. Now where are the retailers who are willing to pay the not inconsiderable rent it will cost them to set up shop there?

UPDATE:
The store is indeed closing. According to our friends at Racked, Kurt Geiger is shutting down all of its freestanding stores in the U.S. The California units are already closed, and the Bleecker Street location is the only one that remains open —but only for the moment.