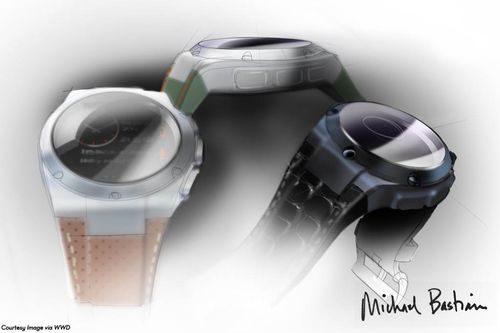 While everyone is breathlessly awaiting an official announcement introducing Apple's long rumored iWatch, menswear designer Michael Bastian has collaborated with Hewlett Packard for his own elegant take on wearable tech. Apple's super-sleek designs for iPhone, iPod and iPad have garnered acclaim, but the jury is still very much out on whether pleasure in carrying and using such futuristic designs will translate into desire to wear them every day, particularly for people who have more sophisticated fashion tastes. We’re at the beginning of the wave, but the smart part comes before the visual part,” Bastian tells WWD. “We felt there was a need for something that feels like a watch first.” Bastian's design (pictured in the gallery above) is more specialized than what is being anticipated from Apple. It features a sizable 44-mm. stainless steel case and three interchangeable watchbands in black rubber, perforated brown leather and olive green. A limited edition all-black version is also in the works. The more traditionally styled timepiece will have a lighted dial inspired by luxury car dashboards. Inside, the operating system will be compatible with both Android and iOS devices and will offer access to emails, texts, calendars and a host of other information including stock updates, sports scores and, of course, weather to name a few services.

We know that the watch will launch this Fall, and will initially be available exclusively through Gilt.com. what we don't yet know is exactly how much it will cost, so there's still a little bit of mystery left for this particular product.