Antiques Give Way To Book Culture
On Columbus Avenue 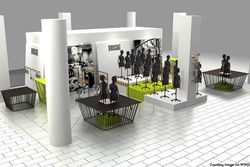 Lord & Taylor stirred up some excitement last month when it announced some new concept shops for its Fifth Avenue flagship meant to burnish the chain's fashion image and attract younger, more adventurous customers. One of them, the Birdcage (rendering at right), named for the chain's signature restaurant of days gone by, focused on accessories and emerging designers along with vintage items from luxury brands like Chanel, Louis Vuitton and Hermès. No big deal, right? You can find vintage handbags from luxury brands all over New York in resale shops and even at flea markets on occasion. Lord & Taylor promised that the pieces were sourced form reliable resale vendors to assure authenticity.
Well, Chanel, Louis Vuitton and Hermès were not amused.

Even though Lord & Taylor does not do business with those labels' handbag lines in its stores, the brands made their displeasure known and exercised their influence not directly to the chain, but through its parent, Hudson's Bay Company, which also owns Saks Fifth Avenue and The Bay in Canada. The three brands, like most other status labels, discourage buying and selling their products through unauthorized channels, and have proved to be aggressively litigious if there is even a hint of counterfeit activity. Here is where being part of a conglomerate of department stores can be tricky, because sibling chain Saks carries current merchandise from those labels in many of its locations, and HBC was not interested in jeopardizing its relationship with some key vendors just so Lord & Taylor could sell a few vintage purses. It's possible that Lord & Taylor's own Chanel cosmetics business could have been threatened as well. WWD reports that the vintage merchandise is now being pulled from the Birdcage assortments, sending a signal to other stores that if they should want to add some cool vintage handbags and leather goods to their offerings, they should be very careful which brands they ultimately choose to sell.