The Altuzarra For Target
Lookbook Has Hit The Web 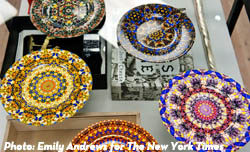 This week's Thursday Styles features Critical Shopper Jon Caramanica tackling a topic that the long running column has yet to cover: Art, in the form of British artist Damien Hirst's new SoHo store Other Criteria, clearly named for celebrated critic Leo Steinberg's famous 1972 collection of essays on modern art (how did you miss that reference, Caramanica?).
It has been many years since SoHo has been the center of New York's art world, and yet it seems that Hirst pointedly chose not to open his business in West Chelsea's gallery district, but in the shopping mecca that neighborhood south of Houston Street. Other Criteria (Hirst's first store in the U.S. and third overall) is very much a store, not a gallery, representing Hirst's statement about how art has become commodified not only by him but other artists as well along with deep pocketed, investment-minded collectors. "...it shouldn’t feel shocking that he has effectively opened a gift shop, right? Other Criteria, which recently arrived in SoHo, is in essence just that, with items at several pricing levels for several levels of buyer, our shopper writes, finding a mix of some things that delight and provoke as well as others that exploit the desire to own something of vague importance and even may mock the very people who are willing to make a purchase.

But should you? Our shopper fells confident that he can discern the items offered with artistic value from the the ones born of hollow exploitation. Can you? Are you the connoisseur or the sucker? How can you tell the difference?

Critical Shopper: Art That’s in the Hands of the Buyer By Jon Caramanica (NYTimes)
Other Criteria 458 Broome Street between Greene & Mercer Streets, SoHo