There Is Now An Hermès Store In Grand Central Terminal 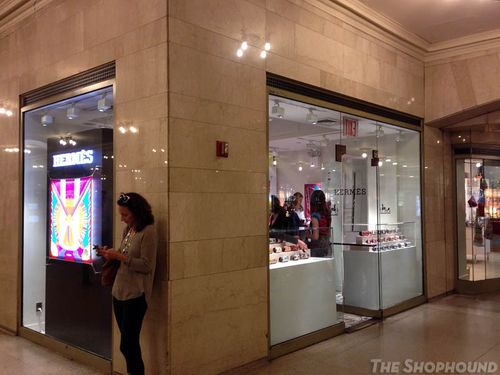 If you had told The Shophound a few years ago that Hermès would be opening a store in Grand Central Terminal, we would have definitely raised that one eyebrow that we can raise at you. However, in the past few years, the historic train station has seen an unlikely open-air Apple Store arrive on the East Balcony, and an elaborate Hermès installation and pop-up has appeared in The Shops at Columbus Circle.

Having seen all that, our eyebrow remained relatively in place when we discovered an Hermès Silk Bar newly opened at the corner of the Lexington Passage off the main concourse at Grand Central. The tiny shop is offering scarves, ties and enamel jewelry, so it is hardly a flagship, but still an extra handy option for the commuting spouse to stop in and grab a gift for the almost forgotten husband's or wife's birthday. Despite the signature looking geometrically patterned tile floor, it is, in fact, only a pop-up that will close in January. Of course, given the terminal's constant efforts to upgrade its retail tenants, we wouldn't be surprised at all if Hermès ultimately wound up with a permanent outpost in the station.