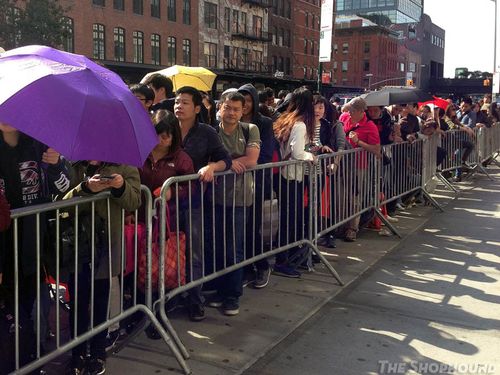 As most people with any working senses know, Apple's newest iPhone models launched last Friday to another round of blocks long lines and truly insane camping out for days in front of Apple Stores in New York and in many other cities to be the first customers for the coveted new device. While the story has become familiar over the past few years, The Shophound noticed something odd while walking past the Apple Store on 14th Street on Friday (pictured above). Even in the mid-afternoon, the line still extended well down the block, containing several hundred people, and, for some strange reason, it appeared that the vast majority of them —at least 90%— were Asian. Now, before you get your hackles up, there is nothing wrong with this. We aren't making any judgements, but it did seem odd that in Manhattan, the group of customers who were willing to spend hours in line would be so demographically lopsided. We aren't experts in Asian languages, but it appeared that they were Chinese speakers and, as a group, didn't seem like the young, tech-crazed type of people who would subject themselves to waiting in line for hours just to be among the first people to get their hands on a coveted device that will be easily accessible to anyone within a few days.

We didn't think much more of it until the next day when we came across a post on Gothamist which suggested that the lines in front of Apple's stores were packed with straw buyers purchasing iPhones for the Chinese Mafia. The article pointed to "Filmmaker and professional fun-haver" Casey Neistadt, a tech fan who has chronicled the annual frenzy over iPhone releases for the past few years. Neistadt was struck with the observation that, when the doors finally opened, what he saw among those who had doggedly waited for days to buy the new iPhone was not the excitement fans finally getting their new toy, but a new grim determination of people who had a task to accomplish and just wanted to get it over with. While The Shophound would not presume that the Chinese Mafia (whoever that would actually refer to) is explicitly behind all of this straw purchasing, Neistadt's video (embedded after the jump below) identifies a pattern of buying among the many Chinese speaking line-waiters, many of whom apparently needed a Mandarin translator to communicate with the filmmaker. Purchase two unlocked phones in cash. Hand the phones off or re-sell them to a second post-purchaser a few blocks away who stockpiles bag of new phones to be sent off to —well, who knows where?

The presumption is that the phones are being sent to China, where governmental red tape has kept Apple from announcing a release date for the iPhone 6 and it is unavailable for legal purchase. According to the Washington Post, the new devices are already selling there on the Black Market for up to 10 times their U.S. purchase price. Neistadt suggests that a network of smugglers has descended upon New York's Apple Stores, and, though he backtracked somewhat from the Chinese Mafia accusations in a later interview, it seems clear to any observer that there is some real organization behind the effort to get iPhones into some kind of unauthorized reselling channel which is artificially packing the huge lines outside Apple Stores with straw purchasers. Without them, it seems unlikely that these lines would stretch for block after block. Many shoppers have reported that it is already fairly fast and convenient to pick one up at one of the city's many AT&T, Verizon or other mobile phone retailers —but, of course, those phones are for people who are actually buying for themselves as they come with service contracts.

Apparently, this activity falls into something of a legal gray area. The buying and immediate reselling is not illegal, and Apple has run into problems in the past trying to discourage sales of desirable devices that they thought were being funneled into unauthorized channels. What is questionable is the presumed smuggling that happens after the observed handoffs. Neistadt's video also documents some unfortunate behavior by NYPD officers assigned to patrol the overnight lines, and some altercations among those in line which makes one question the safety (and sanitation) of having these annual, several-days-long queues at all. At this point, it seems like the only reason why people would endure hours and days waiting on the sidewalk to buy a phone would be for a handsome profit or possibly a legitimate lack of sanity. Have a look at the video after the jump and make of it what you will. In the meantime, when The Shophound gets our new phone, we plan to order it on line to pick up in-store. No lines.