Gant's Sale Is All Samples 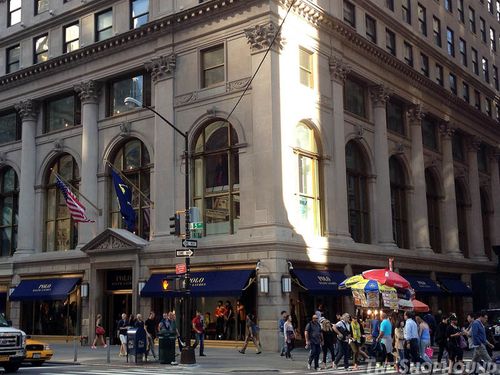 It's rare that a major new store appears exactly as one would have predicted it, but that is the case with Ralph Lauren's Polo Store that opened last week on Fifth Avenue. This is neither a criticism nor a compliment. It just is the way things are in Lauren's world. Even though this is a brand new store concept for the designer, it feels like we have seen it before.
As America's most successful fashion designer, Ralph Lauren, curiously, is the one who is least held to the often crippling requirement demanded of practically every other one of his colleagues in the world: newness. In fact, his customers seem to crave the familiar from him. They like buying more of what he has shown rhem before, at all price points, and the Polo store delivers it to them in abundance. There are new touches here and there, but by and large it is a total immersion experience into the fashion equivalent of comfort food. It is a giant grilled cheese sandwich of a flagship.

New Yorkers are familiar with the designer's boilerplate store design tropes from the proliferation of his boutiques around the city, even as they have switched locations and product lines over the years. Then there are the immense Polo departments inside Bloomingdale's and Macy's and a smaller one in Saks. He is the Starbucks of designers in the city, inescapable in the sense that you are never to far away from some product of his even if it's just a sneaker or a bottle of perfume. So, there was no clamoring for a three level showcase of the Polo label, but then, this is Fifth Avenue, and this store is a brand palace for tourists. While most designers might struggle to fill so much space with their entire output of product lines, Lauren can easily make use of the space with but one of his labels, which is something of a feat by anyone's standards.

Of course, we enter through the mothership by way of an impressive vestibule. The main floor is dedicated to the 47-year old men's line. Even if it has been decades since the Polo label was Lauren's most exclusive, it is still his first, and the one he built his empire on. It remains a cash cow and here is where you will find the khaki pants, the cabled cashmere crewneck sweaters in a rainbow of colors, the cargo pants, the button down shirts and the knit polo shirts with the little insignias. We could spend the entire post listing the items found here, but you could probably list them yourself without even visiting the store, and it doesn't even present the label's entire offerings. While there are a few sportcoats and blazers among the merchandise mix, and a few wall hooks festooned with neckties, the tailored component is conspicuously missing here. Anyone looking for a Polo suit will have to head to Lauren's original Madison Avenue mansion. Yesterday afternoon, it was sportswear that was being snapped up by eager shoppers. We all know that Lauren's company is paying a fortune in rent to be on the corner of Fifth Avenue and 55th Street, but these boring basics will easily cover the expense, and there are countless hyper-styled employees to make sure that each shirt is precisely folded and stacked. The decor is exactly what one expects from any Polo selling environment: rich faux-vintage wood paneling and shelves interspersed with whitewashed sections of the same punctuated with antique props, the odd $20,000 custom bicycle (available by special order), and mannequins rigged with artfully disheveled merchandise styled with enough layers to keep an arctic explorer toasty.

To find anything that feels new at all, you have to walk to the center of the store and use the glass elevator (at right), a unique touch, to venture upstairs to the two floors dedicated to Lauren's new Polo for Women collection.
Well, it's sort of new.
In reality, Polo for Women is just the decade or so old Ralph Lauren Blue Label collection which was created to be a women's counterpart to the men's Polo label. Rebranding it makes one wonder why they didn't just call it Polo in the first place, since it never gained much traction outside of Lauren's own stores, but now, reworked, and merchandised so close to the O.G. men's line, it suddenly makes some sense, and it has been given plenty of space to make its case. The new label gets a lighter, more loftlike environment with white painted brick walls and a bit less of the signature vintage clutter. There are the women's iterations of all the aforementioned men's basics in some sections. In others, shoppers will find other versions of familiar looks from runway shows past, other previous collections, and even some styles that seem repurposed from the racks of the designer's defunct Rugby chain, all sourced and produced to fall within the correct price range. In fact, the new store could go a long way toward finally positioning one of Lauren's labels in the women's contemporary category, one of the few that has consistently resisted his offerings. There is also, on the second floor, a book section featuring the designer's own tomes, several harder-to-find publications from preferred Polo photographer Bruce Weber, and other fashion related volumes. It's a concept relatively new to Lauren's stores, but not one that others haven't been offering for quite some time (cough-Paul Smith-cough). There is also the designer's much talked about coffee bar, featuring Ralph's own custom blends. As The Shophound is not much of a coffee drinker, we are not sure exactly how one distills the flavor of a polo shirt in a cup of espresso, but we are sure they found a way.

In the end, Polo Fifth Avenue is a celebration of the familiar, and the tourists will eat it up. In that sense, the store is basically review-proof, like another Fast & Furious movie. The most noticeable change is that this season, lauren has decided to re-design the actual label sewn into Polo products. Gone is the familiar blue and white "Polo by Ralph Lauren" heritage logo that has remained constant since the designer's fist necktie. In its place is a less distinctive gold-on-blue tag in a font that corresponds with the designers advertising and other media, but looks a little bit banal. For the folks at Ralph Lauren, it must represent some kind of new beginning launched with this lavish showplace, but to The Shophound it only makes us think back to when that old label was something prestigious, exclusive and coveted. It's a long way from Fifth Avenue brand palaces.