Shipley & Halmos Blow The Dust Off
Of Haspel For Next Spring 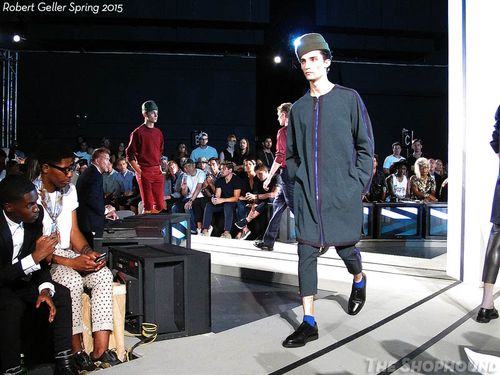 The Shophound took in only one runway show on Saturday because, you know, crushing heat and humidity, but we were sure to make it down to Pier 59 Studios to see the latest from ROBERT GELLER. We had missed Geller's show for the past few seasons, and to give you a greater understanding of why, we would have to note that including Geller, there were seven shows or presentations scheduled for 6 PM on Saturday evening.
SEVEN shows.
So, Fashion Week remains ridiculous. It seems clearer than ever that the menswear designers who haven't already ditched it to show at a more appropriate time for their market definitely should join with those who have to form their own Men's Fashion Week like there is Milan, Paris and London —basically every other major fashion capital city. But we digress...
Anyway, back to the show. The last Robert Geller show we saw was also at Pier 59, but in a smaller, narrower room which made for a lengthy runway, but also sometimes difficult sight-lines and somewhat cramped seating. We were happy to see that he has since upgraded to a much bigger room with a more innovative X-shaped runway that comfortably fit all the guests and also allowed for a better view of the collection for everybody. it was a pretty cool set-up both visually and temperature-wise, which is to be commended when the first three days of an insufferably muggy Fashion Week has seen more than a few attendees who have ditched decorum and gone from show to show in shorts and t-shirts. As for the collection, Geller stepped away from his typically specific narrative references and focused on the clothes, simplifying shapes, adding bolder prints and broadening his typically gray based color palette. The result was a more lush, vaguely exotic collection still rooted in classic, accessible pieces.
We won't miss another.
Have a look at some highlights in the gallery above, and a double-time Hyperlapse video of the finale below.