Uptown's Loss Is NoMad's Gain As Rizzoli Plans A Reopening

Shipley & Halmos Blow The Dust Off
Of Haspel For Next Spring 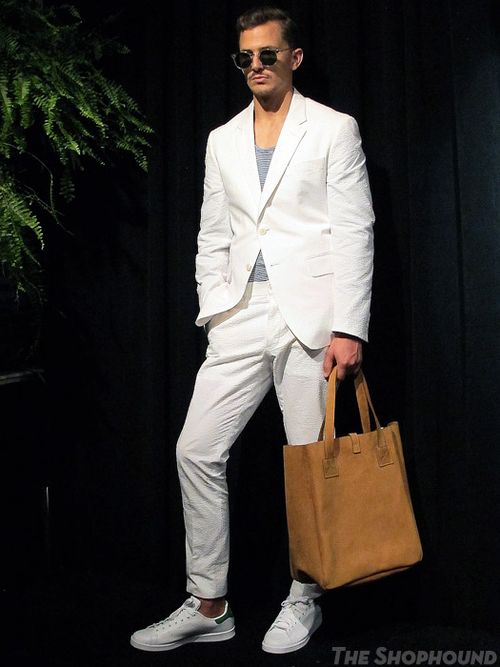 It was over a year ago when we heard that Sam Shipley and Jeff Halmos of Shipley & Halmos would be behind a relaunch of the famous men's suit brand Haspel. Since then, we haven't really heard much about it, until Friday, when The Shophound made our way down to Parlor in SoHo to finally see what the duo had done with label most known for boxy wash-and-wear business suits in seersucker and poplin. If you recall, Friday was miserably muggy, so it was already a pleasure to walk into the Fashion Week lounge that Esquire magazine had set up in the members only club for a few days and immediately be offered a choice of cold beverages. Can we have that at all fashion shows now please? And the bar snacks, too, while you are at it. Basically, clothes be damned, we could have happily set up shop with a cocktail in the posh little club and listened to the jazz combo for the afternoon, but as we made our way to the back, we did finally find the models, and saw that Shipley & Halmos have adopted a less is more approach to reviving the Haspel label. At this point in the menswear timeline, the concept of reviving an American heritage brand like Haspel might be more likely met with groans after a glut of such relaunches and the cresting of the preppy/traditional craze. You can add that to the list of challenges the designers faced when trying to figure out how to inject life into a brand known for rumply cotton summer suits. It turned out, however, the pair found perfect way to relaunch a line of lightly constructed suiting. Instead of pitching the line to beleaguered businessmen in need of some way to dress appropriately for work in the dog days of Summer, Haspel has been remade for a modern guy looking to dress up a more casual look. It's a simple switch of perspective that makes all the difference. The signature seersucker is still there, but now it is softened and presented in lighter, solid tones for those averse to the barbershop quartet look. There were no stuffy neckties, just easy, casual sportswear pieces to round out the tight, ten-look presentation, and of course, the models were shod in what is possibly the canniest relaunch of 2014, the Adidas Stan Smith sneaker. For nostalgia's sake, Haspel also offered a gift bag that hearkened back to the pre-2008 glory of such things which included a sturdy (read: butch) canvas tote from Blue Claw Co. filled with some recent Esquire publications, Mitch by Paul Mitchell men's Reformer texturizer for our hair and four pairs of underpants from co-sponsor Jockey. It is, in fact, the first time we have recieved boxer briefs in a gift bag which is amusing, but ultimately useful, although we are not sure that we will ever make use of the Jockey key ring attached to tiny orange briefs —not a complaint, just an observation. Have a look at the whole presentation in the gallery above.