Affordable Abundance At Hugo Boss
—Less So At Loro Piana 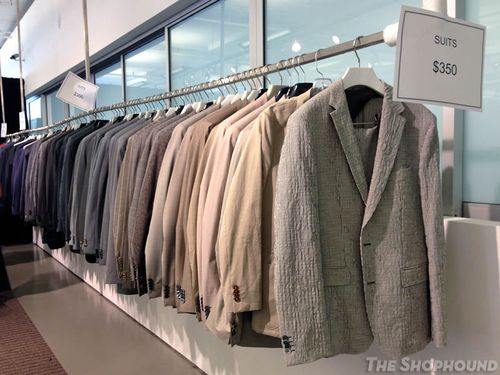 The Sample Sale Season is once again revving up slowly, and though there aren't a ton of major sales happening at the moment, there are two big ones that keep fans in anticipation happening right now.

The HUGO BOSS sale (pictured above and below) began yesterday, so The Shophound trekked over to the vast Starrett Lehigh building in West Chelsea to see what this season's version had to offer. We can't remember if we have always visited it on the first day, but even by midday, there was still a ton of stuff on the racks waiting for eager crowds even though we heard there was a huge, hungry line of shoppers waiting to get in in the morning. The first thing to know about this sale is that, like Gant's and some others, it is a real sample sale, meaning that it does not offer overstock or a range of sizes, but the actual showroom samples in sample sizes only. Because Boss is a huge brand, however, there are tons of them, including some duplicates, but there are also many different suit models, so one 40 regular jacket (the only size available) does not necessarily fit like every other one. Trying on is crucial, and, unless you are exceedingly familiar with the line's various design specs, buying for another person is particularly risky. What we saw appeared to come from the past Spring 2014 collection or before, but there was a lot of stuff. With suits going for a flat price of $350 each, it is a substantial savings over retail prices of $900 to $1,500. Aside from the racks of tailored clothing, there were a lot of shoes, but as they were going for $70 to $85 per pair, they were selling fast. For women, the pickings were slimmer. Though this season marks the beginning of Jason Wu's tenure as the brand's women's creative director, what little we could see offered looked like it came from Spring 2014, which is just before his collections began. Wu fans can sit tight until next season for his designs.

Next, we took a short stroll up the highline on our way to Soiffer Haskin on 33rd Street for LORO PIANA's sale. There, we also saw tons of merchandise even though the sale was already in its second day. Tables were overflowing with plush cashmere sweaters, and there an unusually large offering of Men's outerwear including down jackets and vests featuring the brand's signature refinement and elegance. One would think that this would be a bonanza, but the discounts were only 40% to 60% off original retail prices —though some more interim markdowns were reportedly taken today. these are more like in-store clearance prices. Though any savings is always welcome, Loro Piana's prices have become so staggeringly high that even with a steeper discount, the final tally at checkout will still be a major chunk of cash. While the basic cashmere mufflers which are now Loro Piana's opening price point items were little in evidence, there were many fancier (and much more expensive) scarves available. When a simple pair of cashmere lined gloves starts at around $700 retail, you are still looking at a sale price of around $300 or so at best. With the famous cashmere sweaters retailing anywhere from $1,000 to $2,500, this is not one of those sale where you can load your arms with stuff —unless you can. In that case, direct your driver to a point just west of Penn Station where there's a ton of classic but elegant goods waiting for you to scoop them up. Both sales run through this Thursday the 2nd of October.

Also this week, you should prepare to fight a big crowd looking for gently used designer dresses at Rent The Runway's seasonal clearance at 260 Fifth Avenue through the weekend, and keep an eye out for luxurious women's outerwear at Cinzia Rocca on Central Park South through Friday. Next week, look for contemporary sportswear from Elizabeth and James and more Italian luxury from Pratesi. Stay tuned to our SALE ROLL at left for more late breaking sale news. 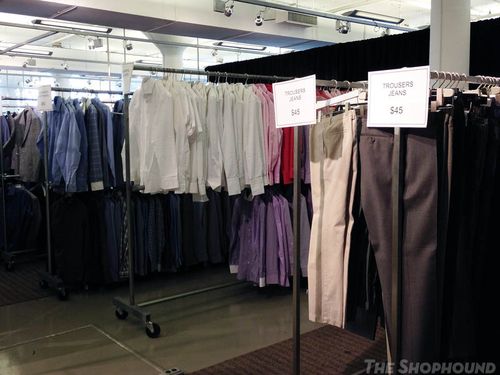 Posted at 10:12 AM in SALEsaleSALEsaleSALE | Permalink | Comments (0)