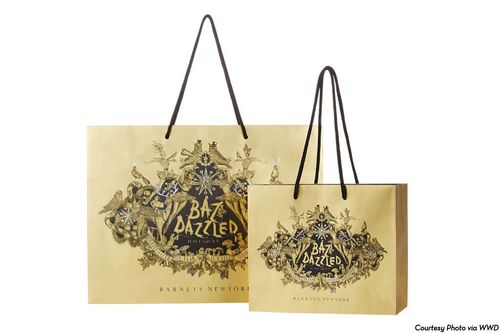 It has been a rough road for the current management team at Barneys New York when it comes to the Holiday Season. Last year's big Jay Z promotional effort collapsed as a particularly ill-timed discrimination scandal unfolded, forcing the cancellation of a gala launch event. Previous efforts involving Disney and Lady Gaga were criticized as off-key and off-brand for a store as sophisticated and exclusive as Barneys, but this year, it looks like the retailer is taking some steps toward the kind of promotion its customers have come to expect by joining forces with acclaimed Australian director Baz Luhrmann for a Holiday program to be called Baz Dazzled.
Luhrmann along with his wife and key collaborator Catherine Martin have developed a multi-platform initiative that will cover shopping bags (pictured above), in-store displays, special products and, of course, windows. The crest pictured on the bag will be the jumping-off point for the program with its artwork set to be re-created in the windows for a six-week run. “We’re entering a whole different world of theater film, costume design and performance,” said Dennis Freedman, Barneys’ creative director, tells WWD. “I hope people are going to be thrilled to see these woodland creatures come alive." Animated displays will have the windows moving round-the-clock and live performances will take place in them throughout the Holiday season. In addition, an elaborate facade will be constructed over the store's Madison Avenue façade.
Special limited edition items developed for the store will include, among other things, a handcrafted Champagne saber, children's costumes and a backgammon set. Expect to start hearing more about it around mid-November, which is not as far away as you might think.