Affordable Abundance At Hugo Boss
—Less So At Loro Piana

GQ's Best New Menswear Designers Have Arrived At The Gap 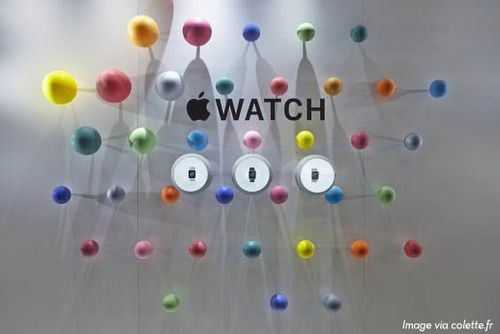 You would think that it would be here in New York at the 24-hour Cube on Fifth Avenue, or at least in San Francisco, closer to the Apple headquarters in Cupertino, California, but the much anticipated Apple Watch or, WATCH, if we are to make the most of our keyboard, made its public debut this morning for one day only at Colette in Paris (window pictured above). While the coveted item will still not be available to purchase until early next year, unveiling it at an event coinciding with Paris Fashion Week signals Apple's interest in positioning the Apple Watch as a fashion item. It also suggests that the more exclusive 18 karat gold "Edition" model, expected to retail for thousands of  dollars, will find its way into leading luxury retailers to sit in cases alongside more rarefied timepieces.

Aside from giving the fashion flock its first look in person at the Apple Watch, the event allowed the company to show off its new senior vice president of design, renowned industrial designer Marc Newson who was instrumental in designing the Apple Watch. He celebrated alongside his good friend, longtime Apple designer Jony Ive as well as fashion luminaries like Anna Wintour, Suzy Menkes and Karl Lagerfeld (have a look at the image from Menkes' Instagram below). Why Colette? It remains one of the most influential stores in Paris and, possibly, the world, and it also was among the first non-electronics retailers to offer an odd little mp3 music player in 2001 called the iPod.

When the watch will appear in New York for us to have a look at it remains to be seen. The Colette event was only rumored in the past few days. When it does finally appear here, it may not show up at the Fifth Avenue Cube, but rather across the street at Bergdorf's, around the corner at Barneys or maybe even at Dover Street Market. After all, Apple stores are still pretty busy with the iPhone 6 launch right now, and the Apple Watch is apparently looking for a more exclusive environment. We will be on the lookout.