Milly, Elizabeth and James & Gemma Kahng Share The Spotlight With An Uptown Event At The Society Boutique

The Neiman Marcus Christmas Book For 2014 Has Arrived 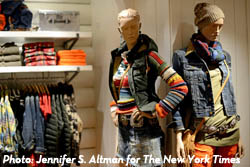 Back from the business of covering the Spring 2015 runway season, Critical Shopper Alexandra Jacobs takes in Ralph Lauren's new Polo flagship on Fifth Avenue in this week's Thursday Styles. Specifically, our shopper focuses on the women's floors where the sort-of-brand-new Polo for Women collection is making its debut. for this assignment, she takes on the mantle of the late Elaine Stritch, singing her bitter signature anthem "The Ladies Who Lunch". Perhaps she is suffering from runway overload after a month of fashion shows, but she has brought a gimlet eye to Lauren's latest retail extravaganza.
And we thought we were the only one who could find the cracks in that designer's billion-dollar veneer.
The digs come subtly, noting how Lauren has deftly managed to eclipse not one but two actual costume designers for films he has contributed designs for (Ruth Morley for "Annie Hall" and Theoni V. Aldredge for the 1974 version of "The Great Gatsby"). Backhanded attention is also given to the stagy enthusiasm of the store's staff and their transparent methods of engaging customers,

“I love your cardigan — it’s so cute,” one piped up as I browsed through another room, containing echt-Lauren items like distressed denim shirts at $165 each, vintage Navajo jewelry in a glass case and down jackets in navy. “It comes in other colors,” she said.

“I love your necklace,” said another salesclerk and, regarding a dark gray poncho, “We have that in other colors.”

In the end, she is suitably impressed with the undertaking, but not exceedingly enchanted. "Ralph Lauren built his business on an ideal of the American upper class captured in an eternal golden afternoon of leisure pursuits; this is his moment of reckoning with the Rich Kids of Instagram." Of course, those kids have already absorbed twice as many images as their parents.  Our shopper doesn't see anything new here either, but she recognizes the target customers' love for remixes and reboots.