Dolce & Gabbana Will Not Go To Jail 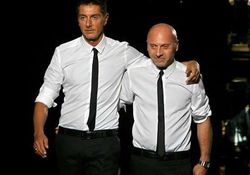 Fashion watchers can lay off the Designer Schadenfreude for the moment. Italy's highest court has declared that the designing duo Domenico Dolce and Stefano Gabbana are not guilty of tax evasion. This overturns two lower courts' verdicts and logically should be the end of the appeals process for the designers (although the Italian justice system does operate differently from what we are familiar with in the U.S., so who knows if this closes the case or not?).
Anyone who was picturing the two behind bars in impeccably styled prison wear will have to wait for the next high profile tax evasion case which shouldn't be too far off. Italy's post-Silvio Berlusconi prime minister, Matteo Renzi has pledged to clean up rampant tax corruption. He is obviously not afraid of going after wealthy and famous figures like movie stars and fashion designers, so expect more of these court cases as long as he is in office.