Trunk Club To Step Off The Web On To Madison Avenue

The Costume Institute's "Death Becomes Her" Is Now Strangely Timely 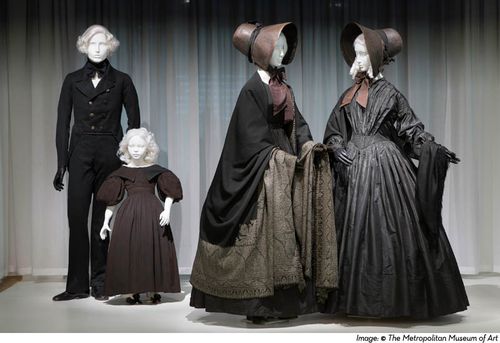 There is no possible way it could have been planned, but the Costume Institute's new exhibition, Death Becomes Her: A Century of Mourning Attire has suddenly taken on new significance. There's a strange sort of symmetry in having New York's pre-eminent fashion museum opening a major exhibition dedicated to the elaborate traditions of mourning attire one day after Oscar de la Renta, "the doyen of American fashion" as he was described in the New York Times, passed away at 82. It's almost as if the Costume Institute has taken on the mantle of designated mourner for the entire fashion industry who is, at the moment, feeling the loss of a particularly beloved, towering figure. 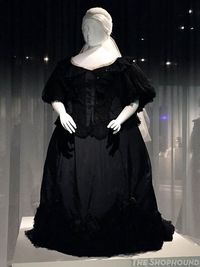 Of course, there are no Oscar de la Renta dresses in Death Becomes Her. It covers traditions of mourning that faded about a century ago, and at yesterday's preview, the sad news of his death had not yet reached the public, so visitors were more concerned with the elegant but often macabre issues at hand, mainly the highly codified rules of dress imposed on those who had lost loved ones, and the disproportionate responsibilities (and expense) placed on women to express their grief through clothes. Exactly why Western society in the 19th Century was so obsessed with death remains unclear. Possibly it was just the fact that people died younger then, and medicine was unable to treat illnesses that are now curable. Perhaps part of it had to do with bloody conflicts like the Civil War which brought mass casualties to the U.S. or maybe it was the example of Queen Victoria, who went into mourning after the death of her husband Prince Albert in 1861 and didn't come out of it until her own death 40 years later.

A monarch in perpetual widows weeds, one dress of whose is prominently included in the show (pictured above left), could really cast a pall in the 1800s, and in contrast to Victoria's steadfast display of grief, the exhibition includes two lavishly sequined gowns worn (at right) by her daughter-in-law Queen Alexandra during the later stages of mourning when lighter colors like mauve and lavender were officially allowed and seem to presage the end of elaborately dour mourning dress rules. In contrast to the stark, mostly black silhouettes on display, they hardly seem like mourning wear at all —even by modern standards. The exhibition, curated by Harold Koda, Curator in Charge of The Costume Institute along with Assistant Curator Jessica Regan goes beyond merely presenting the silhouettes of the day rendered in a range of black materials to show how clothes contained specific information and spoke to people. A series of prints on display by Charles Dana Gibson gently satirizes how an attractive woman in mourning was often seen as threatening disruption to polite society, carrying a host of unspoken fears and desires that becomes so weighty she winds up fleeing to a nunnery for her own peace of mind. 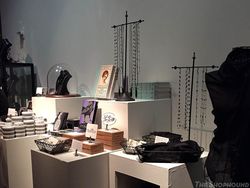 Death Becomes Her is the Costume Institute's first Fall show at the Met in seven years, but now that the Anna Wintour Costume Center is finished, we can now expect two shows a year there in the future. Taking advantage of the time of year, the Met has organized a special Halloween event on October 31st, and the gift counters on the edge of the exhibition room have cobbled together jet jewelry, Victorian period-inspired items and books ranging from macabre-themed art volumes to Edward Gorey's darkly humorous picture books. Given the surprising turn of recent events, however, the show's elegant mannequins now seem to form a silent tribute of sorts to New York most elegant designer, at least until the Costume Institute announces its own Oscar de la Renta show which, if past form holds, is likely to happen within the next year or so.

Death Becomes Her: A Century of Mourning Attire through February 1, 2005 at the Metropolitan Museum of Art, 1000 Fifth Avenue at 82nd Street, Upper East Side