There's Tons Of Stuff
At The Sandro Sample Sale

See The Dazzling Jewels Of
Treasures From India At The Met 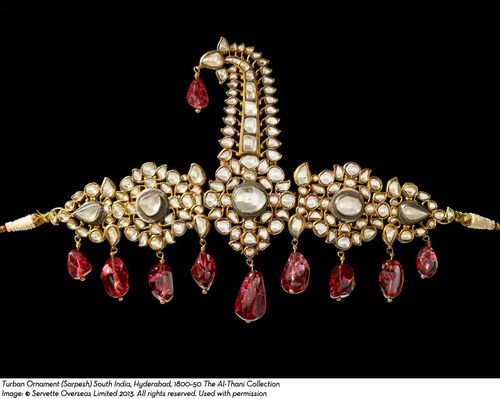 To be perfectly honest, The Shophound doesn't need much of any kind of excuse to go to the Metropolitan Museum of Art, but the museum has been particularly generous in inviting us to preview its upcoming exhibits this month. This week's visit concerned Treasures from India: Jewels from the Al-Thani Collection the small but remarkable exhibition of Imperial Indian jewels from the collection originally formed by Sheikh Hamad bin Abdullah Al-Thani of Quatar. The exhibition features a carefully curated selection of pieces from the Mughal period in the 17th Century to contemporary pieces. More than just a collection of brooches and necklaces, it is a fascinating look into the lavish ornamentation of Indian court life, where it was the men rather than the women who were festooned with gemstones including daggers and swords, turban ornaments, anklets, nose rings and  basically any other possible vehicle for wearing jewels. There are items passed down through generations of emperors as well as newer pieces, but take it as an opportunity to Marvel over some of the mind boggling treasures that can be produced from vast, dynastic wealth from a bygone era. After all, where else are you going to see a headpiece made from enormous diamonds linked together with hand wrought golden bands decorated with huge ruby drops for good measure? (Have a look at a few of the pieces in the gallery above) Put it on your list of things to catch at the Met. This month we have already been treated to the Leonard A. Lauder collection of Cubist masterpieces, Death Becomes Her at the Costume Institute and now this lavish display of Imperial Indian splendor. Block out an afternoon and head up to the Met. It will be time well spent.

Treasures from India: Jewels from the Al-Thani Collection through January 25th, 2015 at the Metropolitan Museum of Art, 1000 Fifth Avenue at 82nd Street, Upper East Side