Chelsea's STORY Partners With Target For its Holiday Concept Store One might think that since Manhattan has had a Topshop in SoHo for a few years now that the frenzy around the opening of the second store on Fifth Avenue at 49th Street (where Lacoste once hung its crocodile logo) would be more subdued, but no. It is not. To be fair, the store's original stateside debut did not have superstar model Cara Delevigne and actor Max Irons (son of Jeremy) there to greet the first shoppers. When the Shophound passed by earlier today around 12:30 PM, the line to get inside the store wrapped around the front and stretched halfway down 49th street to the corner of 30 Rockefeller Plaza. Early birds appeared to 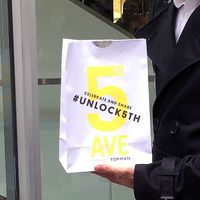 have some sort of gift bag in hand (at right) probably holding gift cards and special coupons and such. It won't be the only major retail craze in the neighborhood this week as the H&M on the next block will soon be hosting a crowd of its own when it debuts the Alexander Wang guest designer collection tomorrow, ut for the moment, the spotlight is on Topshop whose newest store was celebrated by none other than Beyoncé last night. The chanteuse had her own collection with rival H&M last year, but she has switched camps to develop an activewear line with Topshop chief Sir Phillip Greene.

So, no we will not be visiting the store right away, but what is causing such a stir is Topshop's largest store worldwide, whose 33,000 square feet second only to the 90,000 square foot flagship in London. Her on Fifth Avenue, there are four floors that, according to WWD, are expected to generate about $80 million in sales, given its high profile, tourist heavy location.
So, no pressure or anything.

It is the middle of of a meeting place of sorts for the new international apparel chains situated between the city's oldest and newest H&M stores, on the same block as Aritzia and just a stone's throw from huge flagships for both Zara and Uniqlo. There's even old Grandpa GAP a few blocks up Fifth. Inside, shoppers will find about 135 items for men and women that are exclusive to the Fifth Avenue store and a huge 45-foot backlit graphic at the back of the store. Greene has been notoriously picky about locations, which explains the lag time between the SoHo store and this one, but the plan is to ramp up U.S. store openings  and to even bring distribution centers and web-order fulfillment to the U.S. to expedite deliveries. Expect to see more Topshops everywhere soon, but in the meantime, we will wait for the crowds to subside before we venture to the newest one.